An Interview with Kim Grady 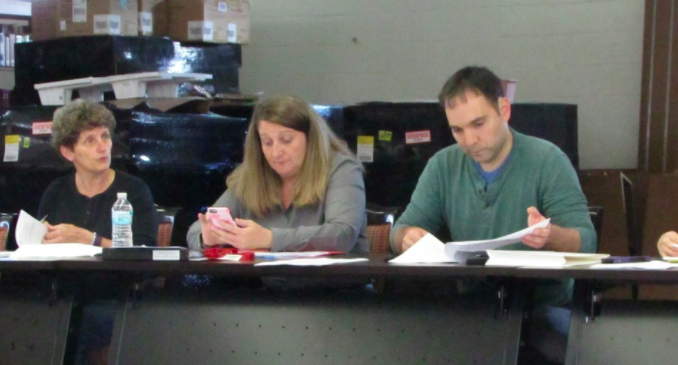 The Echo sat down with Kim Grady, who has recently been appointed to the position of permanent superintendent, to ask her some questions.

Echo: Give us a brief rundown of what happened within the School Board leading up to you being chosen to be the new superintendent. How did it all play out? Was it an uphill climb?

Grady: So I’ve been in the shared service agreement since 2010. So when the former superintendent left in 2016, I was placed as acting interim superintendent, so I was the assistant superintendent and Director of People’s Services prior to that. I’ve been in the district this entire time. Then it was time, after regionalization, we committed to doing a full search for the superintendent. So I went through the process, the interview process-you know, it was on public television-and they had their debate and discussion of the two candidates and then they offered me the job. I think that evening, they offered me the job … then, with everything going on with the building project, and the end of the year, there was a little delay in getting my contract negotiated.

Echo: How long have you been interim superintendent?

Echo: How did you first come to the position of interim superintendent, and how long were you planning on staying in that position?

Grady: So I was here, in house, when our former superintendent left. And so I stepped in as acting, and then I was appointed interim. So my first round of appointment was for six months, and then they were talking about finding another interim because we were going through the regionalization process, so I just agreed to stay on to June 30th of this year. And as this time is going by, and I’m doing the interim work, then they posted for the permanent superintendent and I applied.

Echo: What is your favorite thing about working at Greylock, as opposed to other schools?

Grady: Well, it’s always the kids. They’re my favorite. I’ve been in very urban areas outside of Massachusetts, and I think coming back to the Berkshires-I returned to Pittsfield and worked in Pittsfield and then came here-so this is the very first rural area that I’ve worked in, and we have a lot to offer and a lot of opportunity. We have the partnerships with both of the colleges, as well as the community college … it’s different here in north county than it is in Pittsfield. I don’t know how to articulate that, because I love the work I did in Pittsfield for, you know, drop-out approach and recovery and alternative education, but I’ve had the opportunities to bring some of that type of work here for kids that needed a different pathway. I like being with kids. So I see the preschoolers right up to doing graduation rehearsal this morning.

Echo: What schools have you worked in before that were notable or meaningful experiences for you?

Grady: I started as a classroom teacher, in Pittsfield, and really had a great experience there. And then I left the area to go to Pennsylvania. So in Pennsylvania I worked at a really large career technical institute that was 12 sending districts, and it was vocational education plus an academic center and so I had the best of both worlds. So I was seeing kids go career and college ready and I was seeing kids go vocational college ready as well and I had fantastic leadership and mentors there. And then I came back to Pittsfield, and again had great leaders in Pittsfield … I had a very strong superintendent that I worked under in Pittsfield, great business manager, and so I learned a lot. And I was able to then take what I learned and bring it here, and then, you know, grow here with the different administrators that I’ve worked with. All along the way I’ve just, based on the different positions that I’ve been in, I’ve been able to learn from somebody that I’ve worked with, and each of the schools are so very different. So, you know, that was a big shared vocational institute and then Pittsfield was a lot of community engagement and drop-out prevention and recovery… so they’re all very different and unique so I’ve learned a lot along the way, just a lot of different skill sets.

Echo: How big of a role did the support of Greylock students play in your attaining of the position? I know quite a few signed a petition and that it was presented during a board meeting.

Grady: I never saw the fully executed document. I was on medical leave when that happened, so you guys did that as I was prepping for surgery that night. I saw Josh Duncan and Jacob Hane and Morgan Pannesco, they were in here when I returned to work after being out for a few weeks and I have to tell you, it warmed my heart. I don’t remember my superintendents going through school, but because I’m in the building and kids see me, they know who I am, and it meant a lot that kids knew who I was and advocated for just keeping their school system on track … so for me, that was a great feeling. And it was great to get that news, you know, when I was coming out of the hospital. It was just, you know, it was awesome. And the kids are great.

Echo: Could you go over the details of your contract and when you being superintendent is officially going to go into effect?

Grady: I spoke with the person who’s doing the go-between for the negotiations this morning as well as the School Committee treasurer just a little while ago and I said “you know, can we just wrap up my contract?” It’s not on tonight’s agenda, because it’s a pretty full agenda, so it will be on next Thursday’s agenda. So on the 14th, they’ll talk about the last edits within them and then they’ll bring it out and vote in open session. So the plan is that it will be fully executed next Thursday, the 14th, and then July 1st I’ll be permanent superintendent.

Echo: How do you imagine responsibilities will change once you are confirmed, if at all?

Grady: They won’t, just because I’ve been doing it now for eighteen months.

Echo: So no real difference?

Grady: Well, I shouldn’t say that, because with the regional agreement, now that we’re one region, one big thing that will change is that I will not have five school committees anymore. I will have one … That does change. I forgot about that.

Echo: Do you have any future plans for Greylock, or any notable goals you plan to work towards during the coming school year?

Grady: We are coming out of having a whole lot of people in positions that had “interim” in front of their name. So I had an interim Director of People’s Services, and I had a one year contract with the business manager of the company we utilize, and we had a new building principal coming down to Lanesborough Elementary School, and the project finishing. So our goal is to get the project finished, get our certificate of occupancy, get our schedules rolled out, and everybody moved back in comfortably here to Greylock – and then really start to grow and develop a solid administrative team. A permanent one, you know? So our biggest thing that we have to do as a region is our strategic planning. In the months ahead, we’ll be having summer meetings, talking and gathering facts and data and building our school improvement plan, district improvement plan, and ultimately our strategic plan for the region. So we have a lot of work.

Echo: How has the building project affected your tenure as interim superintendent?

Grady: I’m involved with the building project. We have weekly meetings, we have the monthly School Building Committee meetings … I think with the April deadline moving now to, you know, July and August … scheduling stuff for us, just making sure that all the kids are having their programmatic needs met in our small confinement that we have. And then, you know, successfully moving over there. So it’s a couple more meetings, some critical decisions that have to be made, but when that’s done it’s kind of all going to come together at once. The building project’s gonna be completed, you’re going to go from five School Committees to one, so then I’ll be able to really focus my energy on working with building principals, creating a cabinet-level team, and setting some really strong goals for the region.

Echo: And a classic Echo question, just to end this review on a fun note: Red Sox or Yankees?

Grady: (Laughs) I would say Red Sox … I grew up in a household with two brothers, so Red Sox was, you know … I’m not a sit-down-watch-baseball kind of person. My daughter’s an athlete, but that’s competitive figure skating, and so I didn’t do baseball.