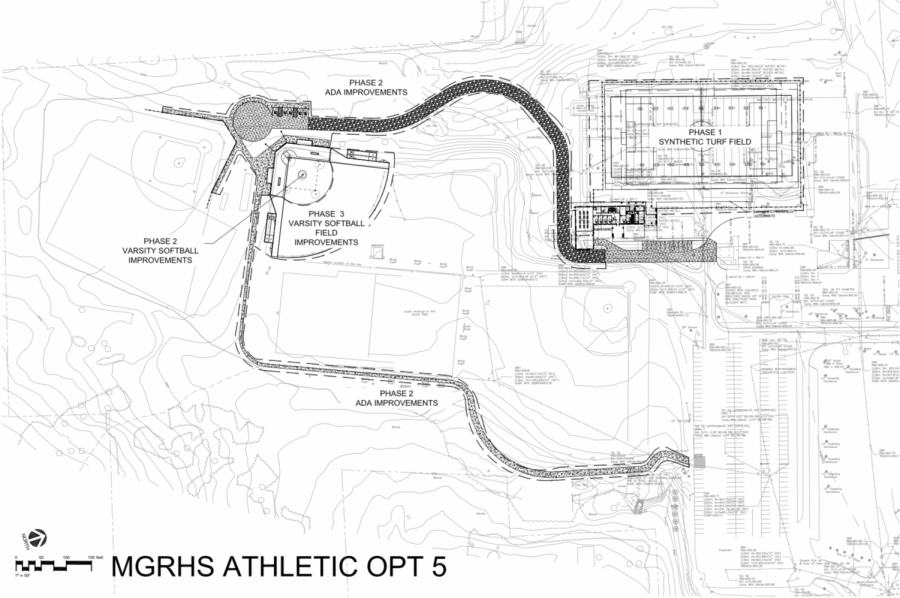 The plan for all athletic improvements. The turf is labeled in the upper right.

On Tuesday, March 12th, a school council subcommittee met to discuss the future of a turf at Greylock. Coaches, Parents and Students gathered with the architect, Ed Art, of the new project to move forward on design plans. Since the last meeting, plan 5B was decided on, a plan that has the new turf being built behind the school, keeping the John T. Allen field where it is now. The new turf would include all new lighting, scoreboard, and bleachers. The committee is chaired by John Skavlem, who had said that “a turf field is a very apparent need here”,

The committee ultimately decided on plan 5B due to the money put into the upkeep of the John T. Allen field over the summer. The committee has a remaining 3.5 million dollars from the Williams Capital Gift to put towards the turf field and improving the athletic complexes in general. Talk of a track on Greylock campus has been put on hold while the process of installing a turf begins to be set into motion.

The topics of the meeting revolved around the details of the turf, as opposed to the actual logistics of the turf. The architect of the project lead the meeting, bringing in samples of turf pellets, the mat to go under turf, and actual pieces of turf. The turf will most likely be made of a hybrid between monofilament turf and slit film turf. Monofilament turf is used for soccer fields and slit film is used for football. Because both of those sports will be played on the turf, the hybrid option would be “…the best of both worlds and our go-to standard of turf,” according to Art. The Williams turf, which is fairly new, is also a hybrid of the two turf choices. The Williams turf was the basis of many questions from the committee, as Greylock sports teams have had experience playing on that field before.

Questions also arose about the safety standards of the turf. In recent years, spikes in cancer of soccer goalies have been traced back to the black pellets that fill a synthetic turf field. In the past 15 years, 237 soccer players have been diagnosed with cancer, according to the Washington Post. These turf pellets, or at least the mainstream options, are made of tire parts that are needed to support the blades of turf. A study published by the US National Library of Medicine claims that tires have chemicals that are potentially dangerous when exposed to frequently. When posed with this question, Ed Art, the architect, responded by saying that these chemicals could not be transferred through the body, although he did not touch on the risk of inhaling these chemicals or getting beads in open cuts.

The Washington Department of Health conducted a further study on this matter and found that these turf pellets don’t actually increase the risk of cancer in soccer players, even going further to say that the chemicals found are similar to the ones in natural soil. Many studies have been conducted since then, which contradict each other in terms of just how dangerous these tiny beads are. But most seem to agree: more research needs to be done until a decision is set in stone.

High level professional soccer games are all played on grass, so when the 2015 Women’s World Cup was set to be played on turf, a lawsuit was filed claiming discrimination and unsafe playing conditions. Quoted in a Washington Post article from 2014, all time leading goal scorer Abby Wambach said. “the game plays differently on artificial surface, not just because of the fear of injury but because it’s a different surface.” Many soccer players are familiar to the to the horrors of especially bad turf burn, which will become even more familiar as the committee moves ahead with the construction process.

While no mention of those turf related injuries arose at the meeting, Art assured the group that the pad underneath the synthetic turf reached Head Injury Criteria of the NFL, which means the likelihood of sustaining a head injury upon impact. The shock pad planned to be put under the turf guarantees the necessary 120 GMax. He did mention the slightly different, faster ball bounce on synthetic turf especially in lacrosse and football, so teams may need to adjust their play to that.

All signs point to the committee moving ahead with the project. The bidding process will begin in mid April and a contractor will be on sight by mid May. The biggest foreseeable challenge will be acquiring a building permit, but it is possible to bid without the process. Construction will begin as soon as a permit is obtained.