Sonya Carrizales on Time in Japan, Learning the Language 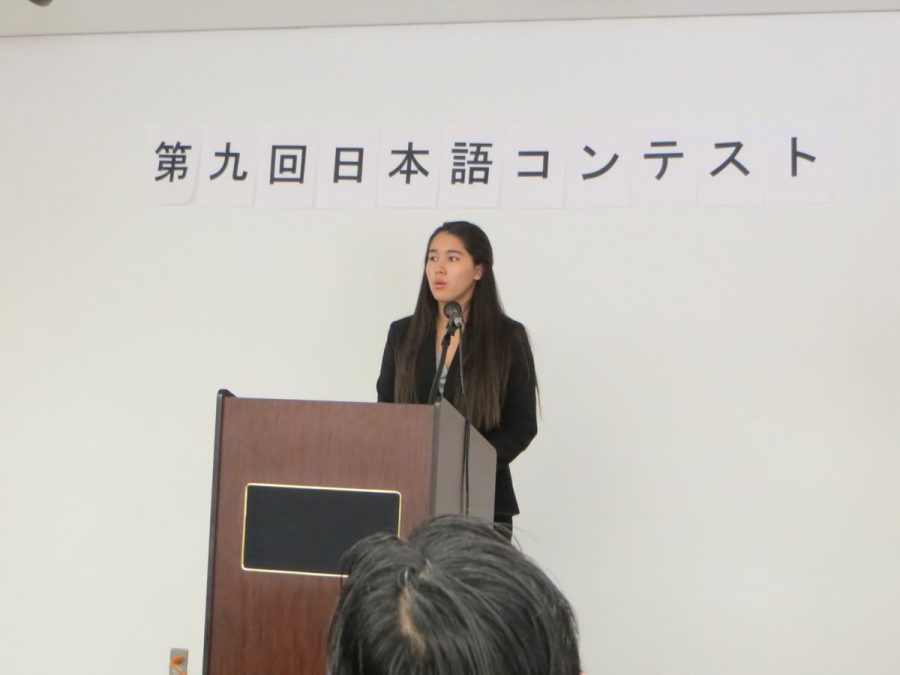 Carrizales speaks at the Japanese Consulate in Boston's competition, in which she earned first place.

Carrizales: I first got interested in Japanese when I was a kid. I used to see all these Studio Ghibli movies. The first one I watched – I can only think of the name in Japanese right now – oh, it was Spirited Away. I also love Whisper of the Heart, Princess Mononoke, and basically all of them. I used to watch all of them as a kid. I always knew I wanted to go to Japan.

E: How did you get there?

C: I never thought about studying abroad, actually, until I moved to Northampton from Jacksonville, Wyoming. That was a big move and it was a lot for me. Because I had already gone to a new school, I figured it was my sophomore year and this would be a good time to go abroad if I wanted to. So I looked up study abroad programs after my first day of sophomore year and I found AFS. My mom actually went abroad in Spain for a semester with AFS when she was a junior in high school, so I knew about the program beforehand. So I was looking into it and one of the programs that was left for the next year was in Japan so it just happened to work out. That day I applied to the program. I was just like, “Let’s try it and see what happens” and I got accepted in January of 2017 so I was really surprised. I started studying Japanese from that point yet when I went to Japan I didn’t have very much Japanese experience. I studied the basic Hiragana and Katakana by myself and some basic Kanji but I couldn’t speak at all. Throughout my ten months living in Japan, I learned from my host family, by going to school, from taking notes in class, and talking with friends.

E: What sorts of things did you do in Japan?

C: There’s a lot. So, first of all, at my school, I was part of the Kokusai Kurabu, which is like the international club. Basically, it’s a group of Japanese students learning how to debate in English and I was like an English advisor so I helped with their speeches. I helped them not only their vocabulary and pronunciation but also with their argumentative style and how to make a valid argument with different points. I was also in Sado Bu which was like the tea ceremony club. The tea ceremony is a pretty traditional Japanese culture club. It’s all about making tea for the guests but there’s a specific way you do things. It’s more of an art but it’s very calculated in the way that you have to do everything the exact right way. You have to put pots twenty four tatami mat lines apart. It’s pretty exact. Also, I got to travel a lot because I planned all these various trips with my exchange friends that lived in different areas. So I went to Yokohama with my friend who I met at camp. I also went to Tokyo a few times; I went to Honjuku with my friend Nicky. I loved traveling because it just helped me gain independence, and I think one of the lessons I learned in Japan was how to be okay with going all these places by myself. Learning how to get bus tickets and plan trips in another language was a little stressful but ultimately really formative.

E: How did you continue your Japanese work after this?

C: That was honestly a little difficult because I came back and then transferred to Greylock as a Junior. Because obviously they don’t have Japanese here, I did an independent study and I was also in contact with the Williams professors there. So then I took the JCAT test which is like the placement exam. Over the summer I talked to some of my friends and senior fall semester I did my Williams class.

E: How did you get interested in the speech contest?

C: I didn’t know about the speech program. My professor Chang Sensei told us about the application and we were all supposed to apply. Everyone in my college class sent in an application. They got to choose whether they did the essay or the speech and our professor wanted someone to do a speech so I was like, “fine, I’ll do a speech.”

E: What did you do your speech about?

C: My speech was about how my experiences in Japan were formative to my choice to become an environmental science major because while I was in Japan I was surrounded by nature and it was beautiful always used to walk to the Gempe river and take my little notebook, write notes, and just think about my life. It was very meta.

E: Were you excited about winning the competition?

C: I was surprised about winning. I just went into it thinking if I do my best performance I’ll be happy and I felt that I did do a good job so I was happy regardless. The winning was just an extra thing.

E: What would you say to other students studying Japanese?

C: I would say “Ganbare,” which means push through it or stick to it. What that means is that it’s hard at first, I’m not gonna lie – to learn Hiragana, Katakana, and Kanji, It’s a lot because each of the alphabets have 48 characters and Kanji has 3,000, 4,000 characters and upwards – but I would say the hardest part is just starting. Once you get started, it’s a lot easier to keep learning.