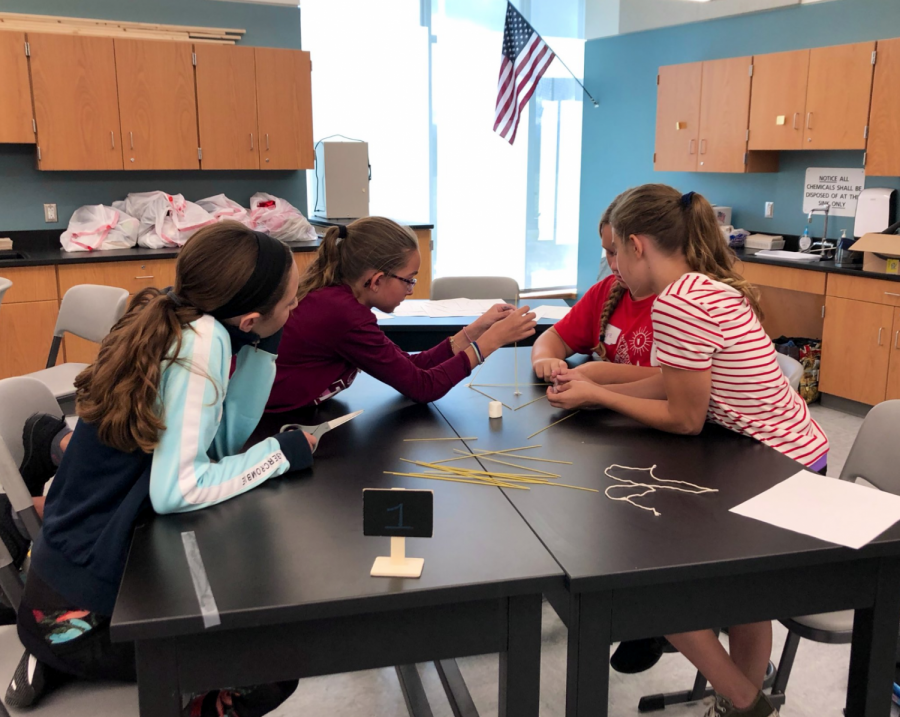 Students complete a design challenge as a part of the new seventh grade orientation program.

Throughout the first three days of school, the class of 2025 participated in a seventh grade orientation, where they got to spend some time together as new classmates and got to know each other a bit better. A grant from the SEE fund made this new orientation, called “The Road To Success,” possible. The program revolved around “get-to-know-each-other games” and conversations about life as a middle/high schooler.

“[The school] was trying to get us to get to know each other and trust each other so that for the whole school year, we will already be friends,” said new seventh grader Emily Alverez of the initiative.

The orientation started off with a welcoming assembly from Principal McDonald, where she discussed the peaks and valleys on the winding road of seventh grade, and provided new teacher introductions. Throughout the next couple days, the new Mounties split apart into their respective directed studies to play some icebreaker type games.

When asked what her favorite activity was, seventh grader Kylie Swearin said, “We did this game where you had to connect pipes and a marble had to roll all the way through and if it fell you had to start at the beginning. That was a fun challenge.” Alvarez added, “The jump roping was probably the most fun, but we also did skits with different people and that was really fun too.” When asked if she enjoyed the fact that the groups were split by way of directed studies, she responded,“I liked that it was by directed study because it was a mix and we got to know people that we didn’t know before.”

Aside from the games, the students also toured the school and reviewed proper cafeteria etiquette. On Day Two, the students fuelled up for the activity filled day with a class breakfast. After more team building games, they discussed the Greylock Way, how to achieve a positive mindset, and learned about high school study techniques.

On the third and final day, each student received a t-shirt as a “diploma” and a “moving into middle school token.” Of the program as a whole, Kayleigh mentioned, “It was mostly helpful because it gave you a chance to get to know people and make more friends and get used to your teachers.”

When asked if there were any moderations that they would have made, Alvarez explained, “The talk was around an hour and fifteen minutes, which was a little too long. The games were also [long], so if everything got shortened down then it would have been better.” Alvarez continued, “If it was only two days instead of three that would be nice because we all just want to start school.”

The Echo also sat down with Ellen Kaiser, a seventh grade history teacher, who was thankful for the opportunity to add this program into the seventh grade year.

When asked how the idea came about, Mrs. Kaiser said, “It just started out as a conversation on the team, and to be honest, I piped up…I’ve always wanted to do some type of camp…the team jumped on board with the whole idea and said why don’t we do it the first three days of school?”

A grant was written, and the program was set in place.

Kaiser expressed excitement around the program as a whole: “I loved it, and I have to tell you I think the kids are much more comfortable with each other at the very beginning…I know the students better than I normally would at this point.” She also found it beneficial to the learning environment itself, saying, “I feel like for me as a teacher, I’m able to get started faster.”

In past years, the seventh grade classes have done a couple games during directed study on the first couple days of school, but the class of 2025 is the first to participate in “The Road to Success.”

Kaiser hopes to see the orientation continue in the future, saying “I think this was very successful. I think the kids…found that they’re relaxed; they know each other, especially in the directed studies. I think it’s made a huge difference.”