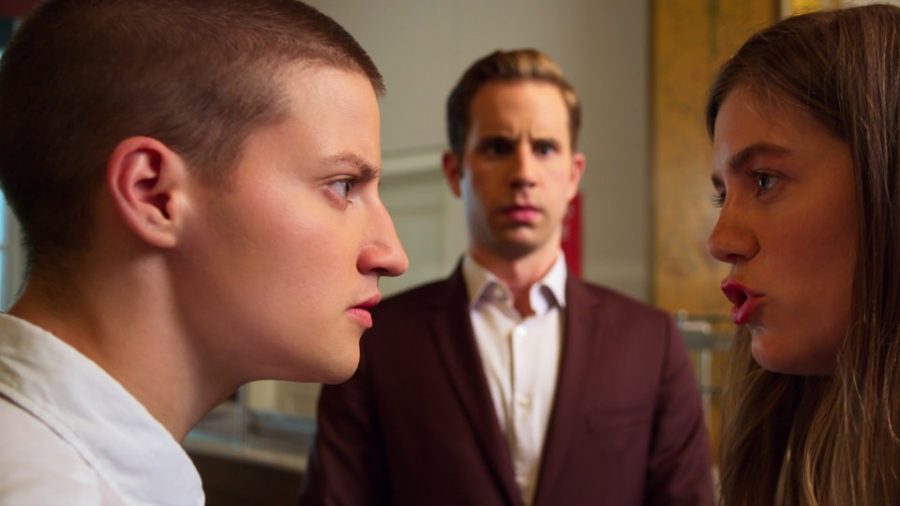 On September 27th, Netflix released long awaited TV show The Politician. The show, written by Ryan Murphy and Brad Falchuck, stars an impressive array of actors and actresses, including Gwyneth Paltrow, Jessica Lange, Bette Midler, and Ben Platt, best known for his leading role in the Broadway musical Dear Evan Hansen as well as his credits as a singer-songwriter. The dramedy series is centered around Platt’s character and his classmates as they fight for the title of student body president of their high school in Santa Barbara. The show also highlights very current issues and topics such as sexuality, classism, and the growing participation of youths voices in politics.

The ten episode first season follows a group of senior high schoolers and their vicious campaigns to become president. Platt plays Payton Hobart, adopted son of the rich Hobart family, who is insistent that he will be president of the United States one day. And while viewers may be surprised at how intense a high school election is portrayed, the series does this to show the ever growing presence of this age’s teens in politics. The last four years have been particularly big years in terms of youth participation in politics, as more and more students and teenagers are using their voices to speak up about important issues such as gun control and climate change. The Politician speaks to this largely, and the over exaggeration of student politics reflects the youth of this era, as even in the show the students discuss these issues. Platt’s character Payton even bases his campaign on his promise to work to improve gun control in Santa Barbara; he asks students to help march on a city council meeting to push for a law stating that a portion of every gun sale in the state be donated to suicide prevention. This topic is also central to the show’s plot, as one of the main characters commits suicide in the first episode with a gun they bought in town. Payton’s campaign for awareness and change is one of many things in the series that reflect youth action is today’s society.

Another key point of the show is sexuality and normalizing sexuality and gender fluidity. Along with the series starring a gay man (Platt) and a transgender actor (Theo Germaine), the show also follows Payton’s complicated romance with classmate River (David Corenswet, House of Cards), as well as other kindling LGBTQ+ romances such as that of Payton’s mother (Paltrow) and her love affair with a woman she knows from the stables (Martina Navratilova), his best friend McAffee Westbrook (Laura Dreyfuss, Dear Evan Hansen) and her relationship with Payton’s running mate Skye Leighton (Rahne Jones), and Payton’s nemesis Astrid Sloane’s (Lucy Boynton, Bohemian Rhapsody) stated sexual fluidity. The show also stars characters with different physical abilities, such as the principal of Payton’s school who is deaf (Natasha Ofili) or classmate Andrew Cashman (Ryan J. Haddad), who has Cerebral Palsy. The normalization of different gender and sexual orientations and physical abilities in the show, and them not being the central plot point, is important to highlight. It is something that makes the show stand out with its diversity.

The show follows these characters from Santa Barbara who are, the majority of them, at least, wealthy and well off. Not counting Infinity Jackson (Zoey Deutch, Set It Up), whose money and trips to Disney comes from pitying onlookers because of her cancer, all of the lead characters live in their varying mansions with their expensive wardrobes and cars. This acts as a sort of comic relief in the show, however, every character living an even more extravagant life than the last. However it also accounts for the privilege we see in everyday life and how that goes hand in hand with the politics of the show.

The Politician is a must-watch. Not only does it elegantly intertwine themes of comedy, drama, romance, and politics into ten episodes, but it shines the spotlight on newer breakout actors and actresses such as Theo Germaine and Rahne Jones, who are not only exceptional actors but who both are vital pieces of the conversation of the LGBTQ+ community coming into media’s light. Plus, Ben Platt and David Corenswet’s scenes together are beautiful and guaranteed tear-jerkers, ones that viewers (I will not deny that I am one of said viewers) could watch over and over again. And, to top it all off, you get to listen to Platt’s angelic voice, which never ceases to disappoint.