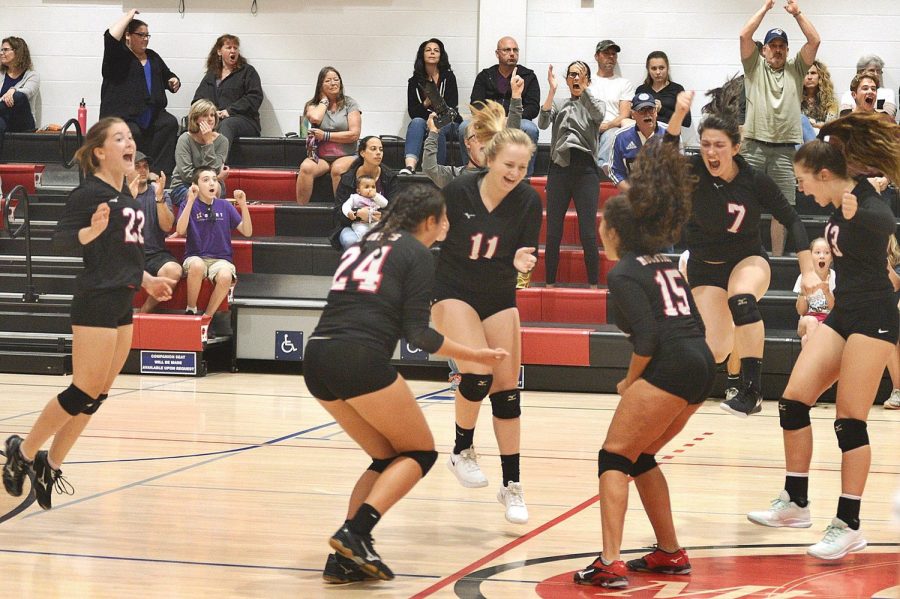 The Mount Greylock volleyball team has had an impressive season so far with a record of 12-6-0, despite having lost eight seniors from last year. After securing a spot in the Western Mass tournament with a win against Pittsfield last week, they went on to beat Mt. Everett in four sets on Wednesday, with scores of 25-10, 25-7, 22-25, 25-8. This Thursday they defeated Lenox in a nail biting 5 sets on senior night. The Mounties continued this winning streak on Monday, defeating Wahconah in four sets as their last league game.

Last season, the team’s starting line-up consisted entirely of seniors, so the future of the team going into the season was unclear. But a number of younger players who played junior varsity last year have now moved up to varsity, helping the Mounties to a winning season.

Emma Hayward, a junior on the team, said, “The team is doing amazing. I think we have really great team chemistry; we’re all really close as friends, which makes us an even better team.” As Lucy Shepard, senior and co-captain stated, “We thought that we weren’t going to do as well [as last season] but we actually have a similar record as last year, and we’re looking to get the same Western Mass seeding as we did last year.” Along with Shepard, seniors Gabby Alvarez and Julia Jammalo are also captains of the team.

The tournament will be challenging for the Mounties, and they will be playing teams that they do not compete against in league games. When asked what it is going to take to win Western Mass, both Shepard and Hayward agreed that a positive attitude will play a big part. Shepard explained that “Focused practices and working really hard every chance we have” will help lead the team to success. The team got the #5 seed for the tournament this year, earning home court advantage for their Friday night game.

Every team has their strengths and weaknesses, including the Mt. Greylock Volleyball team. Greg Geyer, the coach of the team for the past two years, talked about the strengths of the team and said, “On the court, our strengths are defense, passing, and very smart offense. We have the ability to adjust to opponents strategically both defensively and offensively.” He also said their biggest strength is “the unity of the team and being able to respond to adversity such as being down a few points” When asked what the team could improve on, Hayward said they would be continuously working on “skillswise just practicing, especially serving because it starts the play, so you want every serve to go over the net.” Shepard said a strength of theirs was “…getting better at being able to rally with each other and keep spirits high, which really affects whether or not we can come back in a fifth set.”

The volleyball team has had an outstanding season so far, and is looking to continue a successful run when they play #12 Sabis this Friday at home for the opening round of the Western Mass tournament.