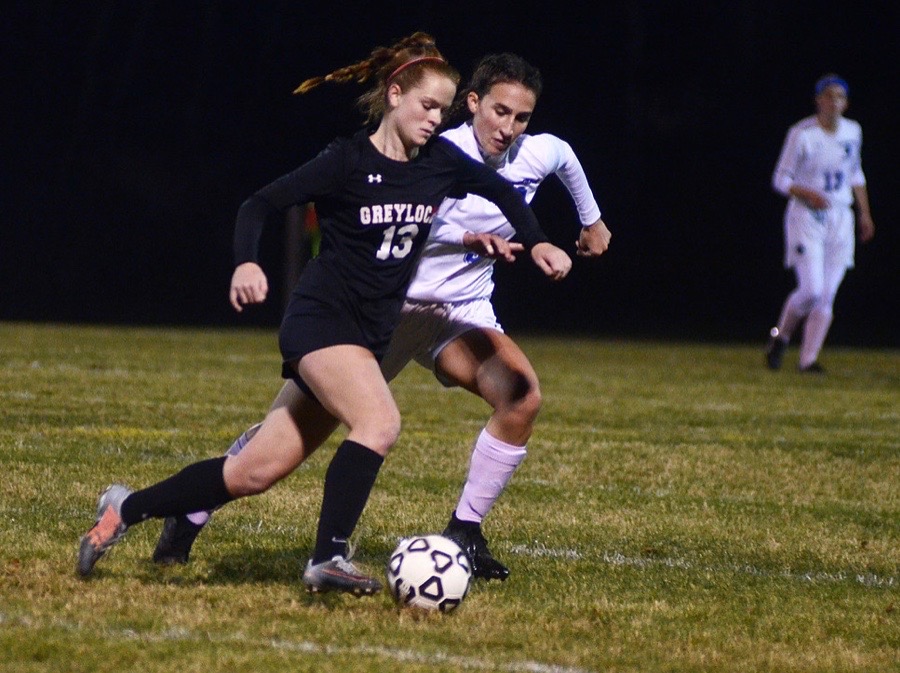 Clara McWeeny plays in one of the games of her 18-goal season.

The numerous athletes at Mount Greylock have brought in a large handful of accolades over the years. This was one such year — the Mounties soccer program saw the title of Berkshire County’s Most Valuable Player bestowed upon Finn Welch and Clara McWeeney, athletes from the girls and boys soccer teams.

Welch led his team to the Western Mass Championship, filling scorecards all year long with a total of 25 goals for the season. Welch tied the all-time points record for Greylock, which includes goals and assists. The senior’s on-field performances led to Berkshire County soccer coaches to vote for him for the award.

When asked about what it means to be named Berkshire County MVP, Welch said that “it means a lot. For my entire childhood and middle and high school career, I have looked up to those who have won it before me. I am honored to be a part of such a prestigious list of players, many of whom went on to play high-level soccer.”

Next year Welch will bring his talents to Springfield College to continue his soccer career. He voiced his excitement at the opportunity.

“Soccer has become one of the most important things in my life,” Welch said. “To carry that piece of me to the next level is amazing.”

The same passion and success in the sport can be seen in the girls team in junior rising captain Clara McWeeny. McWeeny also led her team to the Western Mass playoffs, making it to quarter-finals. She also led her team in goals with 18 to finish out the season. Despite the strength of her season on paper, Mcweeny said that “it was actually a surprise for me. The Berkshire County North is a pretty competitive division so for me to win the award was quite unexpected.”

Mcweeny and the rest of the girl’s team head into next year with high hopes, Mcweeny said.

“I hope we can win Berkshire north this year since. We got really close this past season, so it would be great to end my career with that victory.”

Both athletes can relish in the glory for the time being, but will be getting back to work training for each of their respective seasons next year.