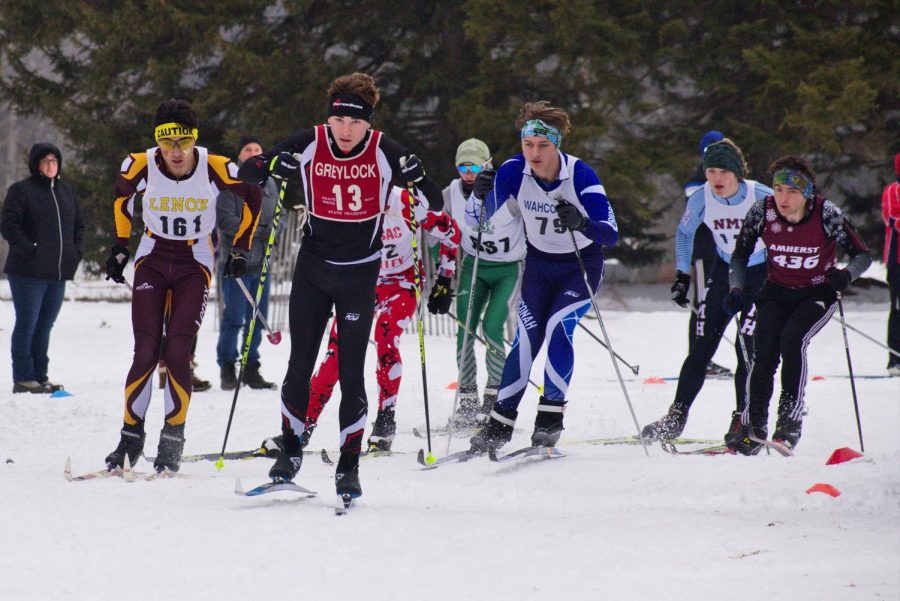 As the regular season closes and the postseason approaches, winter sports teams at Greylock look to continue their success. Both the basketball and nordic ski teams on the boys and the girls side have put up strong showings in their respective regular seasons. They will begin to look ahead to Western Mass and state competitions, in hopes of bringing home another title to Mt. Greylock

The boy’s basketball team has had an impressive run with a record of 13-6, qualifying for the Western Mass tournament in their road win against Mount Everett. Mounties’ captain Toby Foehl brought a piece of history to the 2019-2020 season, reaching the 1,000 career points benchmark in a loss against Monument Mountain. Foehl is only the second player in school history to accomplish such a feat. The senior captain has continued his record-breaking season and currently has the second most three-pointers in Berkshire County.  Alongside him is Sophomore Derek Paris who has the seventh most three-pointers in the county. The team looks to continue their success on senior night with a home game against Lenox this Friday.

On the girl’s side of the court, the basketball team has come up with impressive victories, currently boasting a record of 8-10. Their most recent win came against Bay State Academy on senior night, with senior captain Madison Ross leading the team to a 55-31 victory. The girl’s team wishes to close out the remainder of their season with all wins in order to earn a shot at competing in the postseason for the Western Mass title. They will be looking towards the likes of Freshman Emma Gilooly and Senior Madison Ross to provide them with the buckets they need to propel themselves into the postseason. Gilooly has had a breakout season, leading her team in three-pointers with 22. This number has her coming in at fourth in the county. Ross has also found shooting success this season, averaging 10.54 points per game. The team will look to keep their playoff hopes alive with a home game against Lee on the 15th of February.

On the snow, the boys and girls nordic ski teams are in position to make strong returning runs at the state title. The girls hope to defend their title for the fifth year in a row after tying for first place with Concord Carlisle in last year’s competition. Junior Jackie Wells and Senior Brandi Gill are two of the top skiers on the team, each with an impressive number of first and second place finishes this season. Wells led the pack this Saturday with a first place finish at Prospect Mountain, with Gill coming in second.  The team has struggled against county rival Lenox, but has gone undefeated against every other school they have competed against. Wells and Gill hope to conitnue their winning ways and chase down another state title.

The boys also look toward the podium after finishing in second place  for the past two years, falling just short of skiing powerhouse Concord Carlisle. Junior Col McDermott has been skiing his wax off this past season, boasting all first place finishes. Freshman Foster Savitzky and Junior Gabe Gerry have been not behind in most races. In their latest race this past Saturday, which McDermott won, Savitsky and Gerry finished second and fourth, respectively. They will play key roles in achieving the elusive state title.