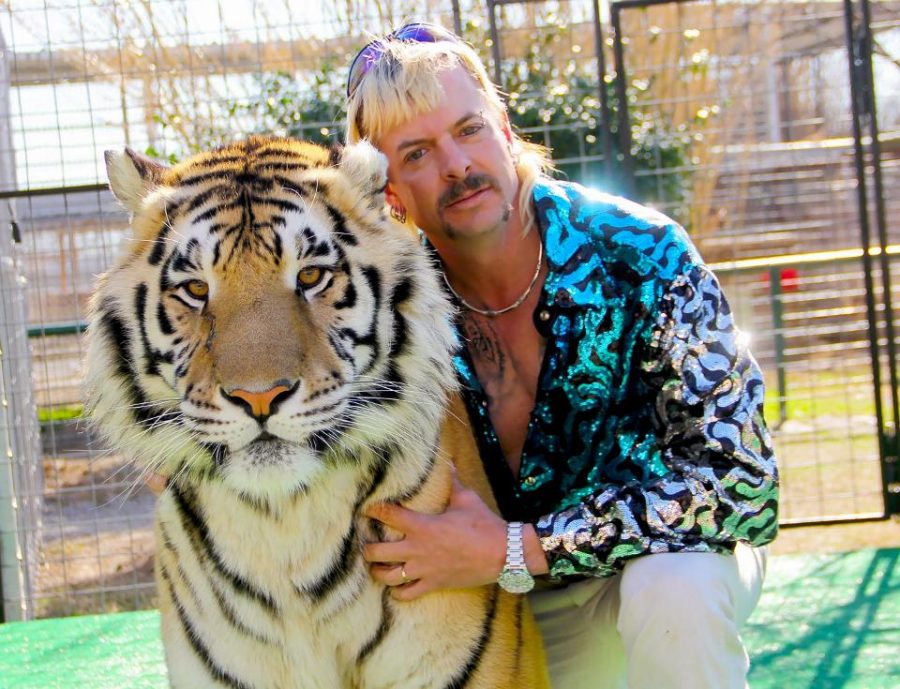 Welcome to the first edition of TV Tuesday! This week, we have Maddy Art suggesting Tiger King, a show on Netflix that has taken the world by storm.

For this TV Tuesday, I’m adding my voice to the chorus that’s likely encouraging you to start Tiger King. This week, my Twitter feed has been taken over by tweets about the show, so two nights ago, I settled in with my family and zero expectations.

The nonfiction limited series is centered on a world of people who are obsessed with and own big cats–lions, tigers, ligers, and more. Joe Exotic, the primary subject of the show, owned and operated GW Zoo, where he kept, bred, and showed hundreds of big cats. Exotic was also a musician and songwriter, a magician, a presidential and then gubernatorial candidate, a gay polygamist, and an internet TV show host.

Opposite Joe Exotic is Carole Baskin, the animal rights activist who operates Big Cat Rescue, a sanctuary that takes in tigers and other big cats until they die. Baskin opposes Exotic’s operation and the breeding of big cats and advocates for the Big Cat Safety Act to limit possession of the cats. As she feuds with Exotic and his organization viciously targets her with foul language and death threats, she faces some significant allegations of her own.

As if this weren’t enough, other big cat fanatics float around the perimeter of the show, such as Doc Antle, whose zoo was a sex cult, and Mario Tabraue, who smuggled cocaine in snakes. To top it all off, Joe Exotic breaks into a musical number about his life every episode or so.

If you’re looking for some serious entertainment during this time off, Tiger King will deliver, with a new plot twist or murder plot every five minutes. The show is not particularly intellectual on the surface, but does raise questions about reliable narration, limitations on freedom and free speech, government intervention, and the ethics of making such a show. Potential viewers should be aware that Tiger King includes some serious animal abuse, domestic violence, aggressive misogyny, and suicide content that can be upsetting.