The Greylock Echo • May 11, 2020 • https://greylockecho.mgrhs.org/5004/features/the-hardest-business-decision-ive-ever-had-to-make-local-businesses-reflect-on-covid-19/

“The Hardest Business Decision I’ve Ever Had to Make” 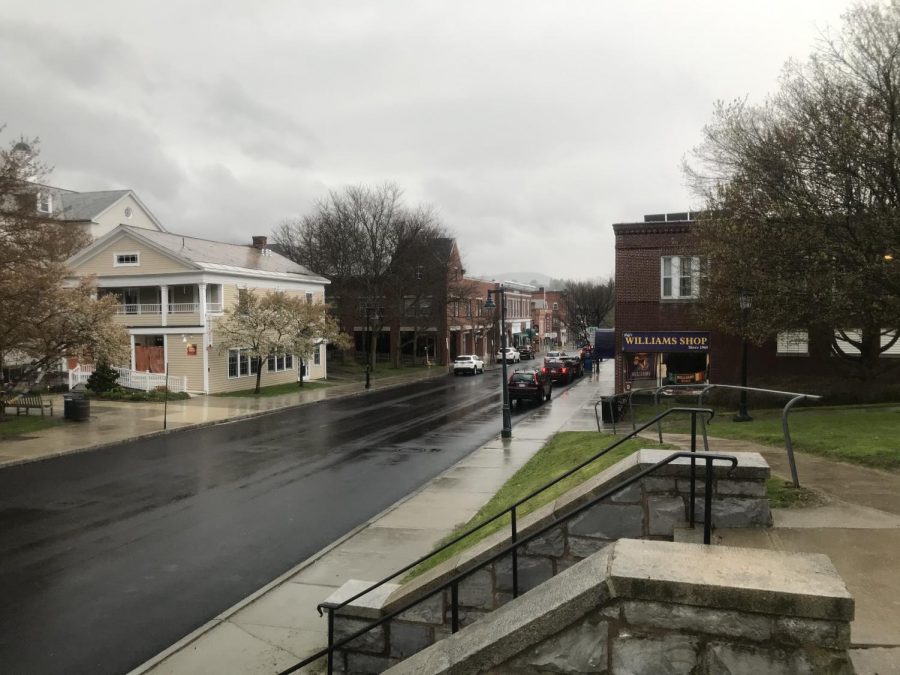 Upper Spring Street is the home to many Williamstown businesses who have been impacted by COVID-19.

Just a few months ago, Spring Street Market, a local business of Williamstown, was bustling, filled with customers in search of sandwiches and baked goods. Now, the store is as closed and desolate as the street outside. “What the closing came down to was that it became really scary,” Karen Gosselin, owner of Spring Street Market, said.

Spring Street Market is just one of the countless stores in Williamstown and across the globe that has shut down because of COVID-19, a virus sweeping the world. When Massachusetts Governor Charlie Baker ordered the closing of all non-essential businesses on March 24th, the majority of local stores closed, not knowing what the future would bring.

Some food businesses remain open, like restaurants for takeout only. But with many stores closed, most owners and staff alike can no longer rely on income from their stores.

In Williamstown, stores such as Blue Mango, Spice Root, and Ramuntos are open for takeout. Others are completely closed, like Chapter Two Books and Purple Dragon games. Many businesses have closed their physical store, but remain available through their online presence.

Where’d You Get That?, a toy store in Williamstown, is one of those. Vice President of the store Ken Gietz said that “the store door is closed, so we wind up getting people calling in and ordering stuff and picking it up outside the store, and we also make deliveries locally.”

Gietz added, “fortunately members of the community seem to be looking for things to do like puzzles and games, and all sorts of things along those lines, which is helpful for us.” Keeping Where’d You Get That? open for pickup and delivery has helped the business financially, as many people are still buying items.

While some food businesses are open for takeout, Spring Street Market decided to fully close. The store stayed open for to-go for a week, but then made the decision to stop. “I would say single handedly that was definitely the hardest business decision that I’ve ever had to make, and one of the hardest decisions I’ve had to make in my 50 years, really,” Gosselin said.

“The risk to customers and my staff; I just couldn’t do it,” she added. “I don’t know if it was the best decision, but it was the right decision at the time. I just really in my heart believe, as you hear in the news, that everybody needs to go home and we need to stop this.”

As of right now, stores are awaiting the go ahead from governor baker to open, but business will not be as abundant as past summers due to the cancellation of The Williamstown Theatre Festival (WTF). This festival is an annual occurrence, and brings customers in from all over, including both the attendees and performers.

But, on April 7th, it was announced in a press release that this year it will not go ahead as planned due to COVID-19. Instead, they are partnering with Audible to do a version that can be heard. This will make it available to listen to globally, but will seriously cut down on the number of potential customers that come to Williamstown this summer.

Gosselin, who often acquires a great deal of business from the people who come to see WTF, said, “I’m petrified to be honest with you, of what the summer is going to be like.” She added, “It’ll be our first summer without any of that business, so it’ll be truly just relying on the locals. Thank God we have amazing people here.”

Although there will be no customers from WTF, Gosselin said, “Am I going to say, ‘Oh, we’re going to go out of business.’ No, absolutely not.” Spring Street Market has catered many events in the past, and Gosselin hopes to expand on this aspect of her business. “I think that will take off more because people are going to be entertaining more from home.”

Spring Street Market, along with other stores, does not have a definite date of opening, but Gosselin said, “We are probably going to have to do take-out and curbside service for a while, but we can’t be closed more than May, just for sanity alone.”

While some food businesses are closing, Wild Oats is still open. Scott Menhinick, the marketing and owner relations manager said, “the most significant development for us has been the move to curbside pickup with our customers.” It is also still open for in-store shopping, although pickup is strongly encouraged.

Explaining the advantages of curbside pickup, Menhinick said, “customers can basically order from home, stay in their cars, and we bring stuff out to their cars, so there’s no contact with the public.” He added, “it lowers the amount of shoppers in the store at any given time which is healthier for them and our employees”