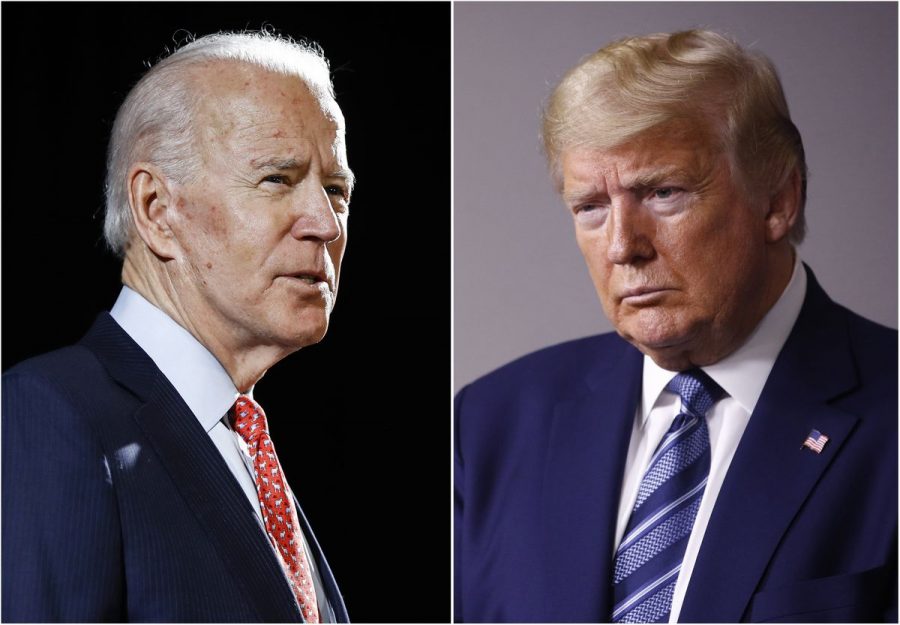 Photo Courtesy of the Chicago Tribune

Ruth Weaver, a senior at Greylock, has logged onto many zoom calls this fall. Weaver, a registered Democrat, said that she’s learned a lot more about her classmates during remote learning.

“I’ve seen backgrounds featuring blue lives matter flags, Trump flags, even confederate flags. Some of my peers have been angry, and I have been to. But I want to genuinely tell those students that I don’t hate them. I don’t hate Trump supporters,” she said.

Weaver wants a dialogue free of hate, but says many people, on both sides, have problems keeping the conversation peaceful, including herself. “Once we start talking, we can find common ground, and not just in opinions, but in facts that we agree on.”

This November 3rd, the country will face a difficult decision. The voter’s choice will not only affect the next four years, but decades to come. Democrat Joe Biden, former Vice President and senator, and his running mate Senator Kamala Harris will face incumbent Republican President Donald Trump and Vice President Mike Pence in the general election.

Many senate races are also going on across the country, including the Maine race of Senator Susan Collins (R) against Sara Gideon (D), and the South Carolina race of Senator Lindsay Graham (R) against Jaime Harrison (D). The Democrats will try to win back the Senate after losing it in 2016.

The Echo sent out a survey to students at Greylock about their political views. 69 students responded, all of whom were under 18 and not eligible to vote.

53 students supported Biden, 6 supported Trump, and the other 10 either supported an independent or did not support either presidential candidate.

Freshman Thomas Art was among the 10 students who didn’t support either of the main candidates. “Neither Trump nor Biden are fit or capable to run the country effectively,” he said.

When asked about the issues important to him, Art cited taking money out of the massive police budget and putting it elsewhere. “Funding schools will do more to stop crime than having more police…equipping kids with life skills and the knowledge to be successful in their futures will keep kids out of crime and in good jobs.”

Junior Cam Abel, on the other hand, supports Trump: “His policies are better. He was good for the country before Coronavirus. He supports our troops and law enforcement.”

Sophomore Eamon Hetherington said he supports Biden for many reasons. “Biden has actual experience in politics and did a great job with Obama from 2008-2016.” Hetherington said Biden’s “extremely intelligent” and “would push forward a very positive agenda that our country needs right now.”

An anonymous survey respondent wrote, “as an openly queer teenager, Biden feels like the choice to protect my rights. With the death of Ruth Bader Ginsburg, I personally am very nervous about my rights both as a woman and a teenager.”

Sophomore Jennah Simpson spoke about her views on this election: “Biden has in no way ever been my top choice, but he’s damage control. Our current president doesn’t believe in climate change, he’s made racist remarks in the past, seriously…look up how many times he’s been sued for race related incidents, and he talks about women like objects.”

Freshman Mira Boyer says that Biden also isn’t her first choice, but “if Trump is re-elected, Roe v. Wade is in serious danger, which is a problem for women across America.”

Roe v. Wade was the decisive Supreme Court decision which gave women more reproductive rights without government restriction. With the recent passing of Justice Ginsburg, the highest court in the land could have a significant conservative majority if a Trump nominee is confirmed.

An anonymous student supported the other side of the argument. “I believe that an unborn child has rights, and the mother can’t kill the baby for her own comfort. Only in the most extreme circumstances should a baby be aborted.”

This same anonymous student said they mostly agree with Trump’s views, and “although he says some crazy stuff, his actions are all that matter.”

When asked to choose the topics that were most important to students this election, four key issues were ranked the highest: health care, abortion policies, racism, and the COVID-19 response. Immigration policies, police reform and climate change were next.

Emily Dupuis, a freshman, said that Biden will help to solve the problem of climate change: “It is not a hoax…it will be irreversible in seven and a half years, and saving the Earth has to happen now, not when it’s too late.”

Junior Henry Art, who supports Biden, said “We need someone who believes in science and who will listen to his health officials instead of covering up the truth and presenting fake alternatives.”

An anonymous Trump supporter said they feel very passionate about the economy. “It’s no secret that one of Trump’s strengths is economic growth,” they said. “And I see Trump as the best candidate to steady the economy.”

Weaver mentioned climate, police, and prison reform along with abortion policies and Coronavirus as issues important to her. Weaver said these issues are human, not political. “It’s literally as simple as wanting to survive and wanting our children to have a world to live in.”

Junior Christian Sullivan said Biden is the candidate who “won’t let our democracy die.” He cited immagration policies are important because our country needs “an empathetic president who understands our borders and our country’s beginnings to be open to immigration and understand that we are a country of immigrants.” Sullivan also said the police system needs to be broken down and built back up to eliminate systematic racism.

Hetherington said he thinks guns need to be made harder to acquire, but he thinks some states need to let down a few restrictions. “For example, in Massachusetts, you aren’t allowed to hunt with a rifle. I think that should be changed.”

Some students were highly critical of the current president. Matilde Henderson said, “Trump has been utterly horrible about handling this pandemic, and the lives of thousands were lost because of him. With the Black Lives Matter movement, the fact that he called [protesters] rioters, thugs; he is a racist who should not be in charge of anything, much less a country.”

Freshman Ben McDonough criticized the Trump administration’s handling of Coronavirus. “The way that our country handled the virus is just outright idiotic. For us to have ‘the smartest doctors’ and then have more cases than any other country in the world is terrible. We need to step up and completely figure out how to fix this.”

McDonough also said Trump “cares too much about his ego, so he leaves others to do the dirty work while he is just the spokesperson.”

Junior Jesse Tague, who called Biden the “shot in the knee candidate rather than in the heart” said America’s “cruel and racist heritage and legacy is rearing its ugly face for the general white public.”

“We must with all our power work for a better and brighter future for all of America’s people,” Tague said.

The Echo also sat down with Hazel Scullin, a senior and leader of the Register, Educate, Vote, club at Mount Greylock. Scullin explained that REV’s initial purpose was to get highschoolers to the polls because voting hours were during the school day. They also used it to encourage students to get to the town meetings and vote there.

“In the past two years, we’ve used it mostly to talk about current events. I think our teachers are instructed not to take a very political stance; I’ve barely ever heard any of my teachers talk about politics,” Scullin said. “It’s super important to have those conversations, and it was really fun to share news and ideas with each other.”

When asked about what students can do to make a difference, Scullin said making calls for candidates you support and going to protests are really important. “It allows whoever’s in charge to compile a list of people that they can call right before the election to get them out there. It also puts your persuasive skills to use. You’re talking to people, and hopefully opening their minds to new candidates,” she said.

On the survey, 9 out of 69 students said they have volunteered for a candidate this year, including Sara Gideon, Elizabeth Warren, Ed Markey, and Alex Morse.

Students were also asked, on a scale of 1-5, how important it was to vote in the 2020 election. 77 percent of students said 5, very important.

“You have to be the change that you want to see in the world, and that includes doing your civic duty and voting for what you believe in,” Scullin said. “I don’t know what more to say, I just think it’s crucial, especially if you’re one to complain. If you want to have any say in the future, vote. Don’t just like sit [there] and complain about it. People need to vote to protect themselves, their families, their friends and future generations.”