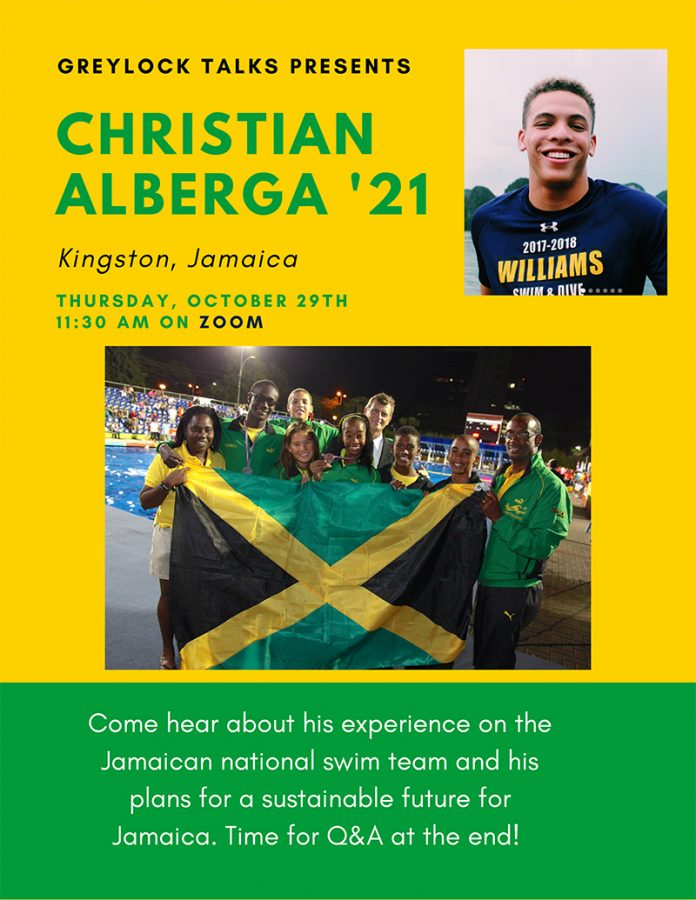 On Thursday, October 29, Greylock Talks returned to Mount Greylock. But this year’s format looks a bit different than years past. Students joined an optional webinar during their directed study periods to listen to Williams student Mikaela Topper interview classmate Christian Alberga, who is originally from Kingston, Jamaica. He attended and swam at Phillips Academy in Massachusetts before going to Williams.

Alberga is on the Williams swim team and is also a member of the Jamaican National Swim Team. Alberga has been swimming competitively since he was 12, training nine times a week and traveling to different countries in the Caribbean for meets.

Alberga also has a personal goal of making Jamaica 100% sustainable in his lifetime. He believes that Jamaica has an opportunity to do so with renewable energy because of their sunny and windy climate.

“Being on a small island, you see a lot of the effects a lot more exacerbated and quickly than they might be seen in developed worlds,” Alberga said. “The sea level is rising and erodes certain beaches.”

Alberga’s advice to young students hoping to achieve sustainability is to get involved with political processes by phone banking and educating themselves in politics and economics.

Sophomore Altan McIntosh watched the WilliNet video of the Greylock Talk on his own time. “There is value in seeing what sort of experience the speaker had as someone from another country going to Williams.”

McIntosh said learning about how Alberga adjusted to the US was educational, and he was happy to hear that the Williams community was welcoming.

“It was also interesting to learn about Jamaica and what it was like to grow up there,” McIntosh said. “I wasn’t familiar with it whatsoever, so having a first-hand account as to what Jamaica is like is very informative.”

Yeshe Rai, a seventh grader at Mount Greylock who watched both talks live, said she enjoyed how Alberga gave information about both himself and his country. Like Melkonyan, she was especially interested in information about Alberga’s childhood and the food that Jamaicans eat.

The webinar, which was posted to WilliNet,  eventually went viral in Jamaica. Even Vice President-elect Kamala Harris’ biological father, Don Harris, who is Jamaican, commented on the video. Harris remarked on Alberga’s understanding of political and economic adversities in Jamaica. Harris also appreciated Alberga’s “unwavering and proud sense of national identity and strong commitment” to serve Jamaica.

Liza Barrett, school librarian and part of the Williams Center at Mount Greylock, helped to coordinate the series of talks. It originally sprung from an idea at the elementary schools called “Zoom Around the World,” where students watched pre-recorded videos in order to learn about cultural diversity.

On Friday, November 13, Greylock Talks brought in their second speaker, Williams junior Wilson Lam, who zoomed in from his hometown of Kowloon, Hong Kong. Lam has spent his recent months protesting the government in Hong Kong. He said around ¼ of the people in Hong Kong are upset with the current government structure and leaders.

Lam also preached being ready for whatever comes and not giving up: “Be prepared to be involved in the long term. Look to the future.”

During Lam’s talk, Rai thought the parts about the Hong Kong government were compelling. She also enjoyed hearing about the college search for Lam and the college experience right now. “I find it inspiring what [the speakers] have been telling everybody and what they’re doing for their countries and the world.”

Barrett said that she learns so much from the talks, and that we should never stop learning from others. “Right now, particularly with so much unrest in the world, and with a pandemic, we need these little pieces of humanity…listening to an expert talk on their area of expertise is fascinating and incredibly beneficial from a learning and growing standpoint.”

Both Melkonyan and Barrett value other people’s experiences. “The human race would benefit from listening more to each other’s stories,” Barrett. “We validate who we are with stories, stories are really important.”

When asked about the benefits of an online format, Barrett said she misses the in-person talks: “There’s nothing like being in a room with someone telling their story; we’re missing out on that experience of being with someone as they tell their story live.”

Still, Barrett said, “We’re having a Greylock Talks with a student in Hong Kong, actively protesting. That is something that couldn’t have happened.”

Melkonyan thinks there are both ups and downs. One great thing, she said, is that people can ask anonymous questions through the Q&A function. The interviewee, Topper, fielded a lot of questions from the students watching.

“Obviously, a downside is that when you’re seeing a speaker, it’s always nice to see the speaker in person,” Melkonyan said. “It gives you a deeper connection with them while they’re talking.”

“Ideally, we would all be listening to Christian in an auditorium and it would be easier to hear and not get distracted,” McIntosh said. “However, the video was a great alternative that provided the same amount of knowledge, if not more, since people would be less shy to ask Christian questions.”

Barrett said she hopes to work with Melkonyan during the second semester at Greylock to bring in more culturally diverse speakers. Melkonyan encourages students to come to as many Greylock Talks as they can.

“Working alongside the Williams Center at Mount Greylock and the Greylock Multicultural Student Union, we have some exciting ideas for speakers,” Barrett said. “More is coming, but this is just a little three person series of international students.”

The next Greylock Talk will be later this calendar year with a Williams student from Turkey.