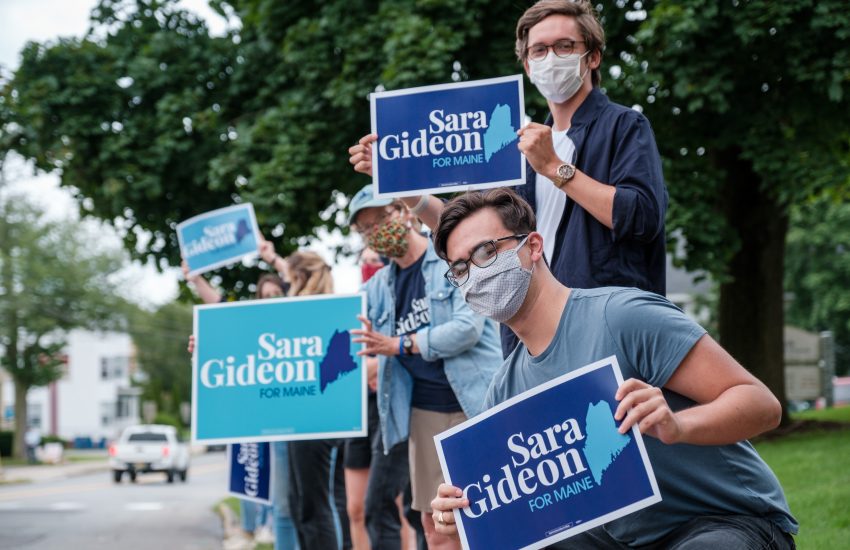 Before COVID-19 hit, many college students were planning on returning to campus in the fall. Some, like Williams student Lily Wells, were even planning on taking a semester abroad. The pandemic, however, has changed these plans, leading to a record-breaking number of students opting to take gap years.

Given that 2020 is an election year, many students chose to take the year off in order to work on various political campaigns. The Echo spoke with three former Greylock students who have spent the past few months working on senate and presidential campaigns.

Wells, a 2018 Mount Greylock graduate, has attended Williams college for two years. Although originally planning on a semester abroad this fall, her plans were changed and she decided to work on Sara Gideon’s campaign for the Maine Senate.

“I started at the end of August, and was kind of full time organizing volunteers, and coordinating phone banks,” Wells said.

As a field organizing intern, Wells was positioned in Oxford County, which is made up of mostly small rural towns.

Wells said she was “excited for the opportunity for rural organizing, because small towns are most familiar to me.”

Wells grew up in Ashfield, Massachusetts, so is “familiar with the different issues that face specifically rural small towns, like our school funding and other things like that.”

Wells spoke about the role COVID played in her working on the Gideon campaign. She said, “I did not plan on taking a gap year, but I’m really grateful that I did and had the opportunity to be fully invested in the campaign work and not not be multitasking schoolwork at the same time.”

Taking a gap year gave her a chance to put her full time and effort into the campaign, which was something very important to her. “Given the importance of this election, and the ability to really make a difference by organizing and doing field work, I felt like it was really important to be able to put my full attention and time towards that national effort,” said Wells.

With so many Senate races happening, as well as the Presidential election, there were numerous campaigns for Wells to work on. When asked why she chose to work specifically on Gideon’s campaign, Wells said, “I  think that Sara Gideon in particular was really inspiring, and a wonderful leader.” She added, “She’s done a lot as a speaker of the house in Maine and is an incredible candidate.”

Although Gideon did not win the Senate seat, Wells says her experiences on the campaign are still invaluable. “I am definitely really impacted by the patchwork of people that I met this fall,” she said. “As an economics major I really want to study policy that addresses food insecurity and poverty.”

Wells is currently applying to a number of different internships, and is “hoping to do more research based internships looking at economic policy.” She plans to return to Williams next fall as a junior.

The Echo also spoke with Cathy McPartland, who graduated from Mount Greylock in 2019 and worked on Bernie Sanders’ deomocratic primary campaign. McPartland was based in Iowa, where she was mainly “phone banking, canvassing, knocking on doors and talking to people.”

McPartland took a gap year because she “did not really feel ready for school.” McPartland said, “I just didn’t really feel like it was time to go to college.”

After choosing to take a gap year, she decided to work on Sanders’ campaign because “I think that Bernie was a really unique candidate.” McPartland added, “I think Bernie’s message about universal social programs is really important, and needs to happen.”

Along with Wells, McPartland feels her experiences on the campaign have been invaluable. “Just being with these people who dropped everything they were doing to just go out and try and fight for something better than how the world currently functions was amazing.”

McPartland said, “the amount of solidarity and the relationships that I built with people there was so inspiring.”

Earlier this year, McPartland was working on Alex Morse’s campaign for Congress, but at the moment she is stepping back from the political campaign scene. She is now applying to colleges, and plans to attend one next fall.

McPartland commented on the political campaign scene as a whole: “Sometimes what it is to be politically active is to just try and impact the people who are immediately next to you as much as you can.”

Finally, The Echo interviewed Maddy Art, who also worked on the Sara Gideon campaign. Art graduated Mt. Greylock in 2020 and plans on attending Yale University next fall. Art was based in Waldo County, where she moved after working virtually for the first part of the campaign.

Similarly to Wells, Art was a field organizer, which she describes as “essentially the backbone of the field department of any campaign.”

“You’re doing a lot of phone banking, and we were able to do some safe canvassing,” said Art. “It was really sort of recruiting volunteers, building those relationships all with the goal of just talking to as many voters as you can, and having as many persuasive and turnout conversations as you can.”

Art said she decided to take a gap year because “there’s this ridiculously important election that I would love to devote all of my time to, I’m already sort of clued in to how I can do that.”

Considering the unpredictability of COVID, Art did not originally plan on working full time for Gideon’s campaign. “I just signed up for a phone bank a couple weeks into quarantine, but then things just kind of went from there,” Art said.

“So much of the campaign was remote, which led me to sort of take on more and more responsibility, even from home and finishing high school and over the summer. So that sort of allowed me to then even consider applying to be an organizer in terms of gap year,” Art said. When asked why she chose to work on Gideon’s campaign specifically, Art said, “I think her commitment to reproductive justice. Also, she’s just a ridiculously empathetic person. And you can tell whenever you hear her speak, it just makes me really energized about what good government can do.” She added, “I would tune into her virtual town halls, and leave feeling just really, really inspired.”

Now that the Gideon campaign is done, Art says she plans to take some time to herself and then she is “thinking about going down to Georgia to volunteer in the runoff elections there.”

She said, “I feel like so much of what I’ve been doing over the past seven months since I first started was with the goal of flipping the Senate and I definitely feel like I’m putting so much into that, I’m not quite ready to not see it through.”

Despite the many challenges presented by COVID-19, past Greylock students have used this unprecedented time to gain invaluable experiences on the campaign trail, allowing them to acquire some real world skills before entering or returning to college.