A Look at Greylock’s GSA 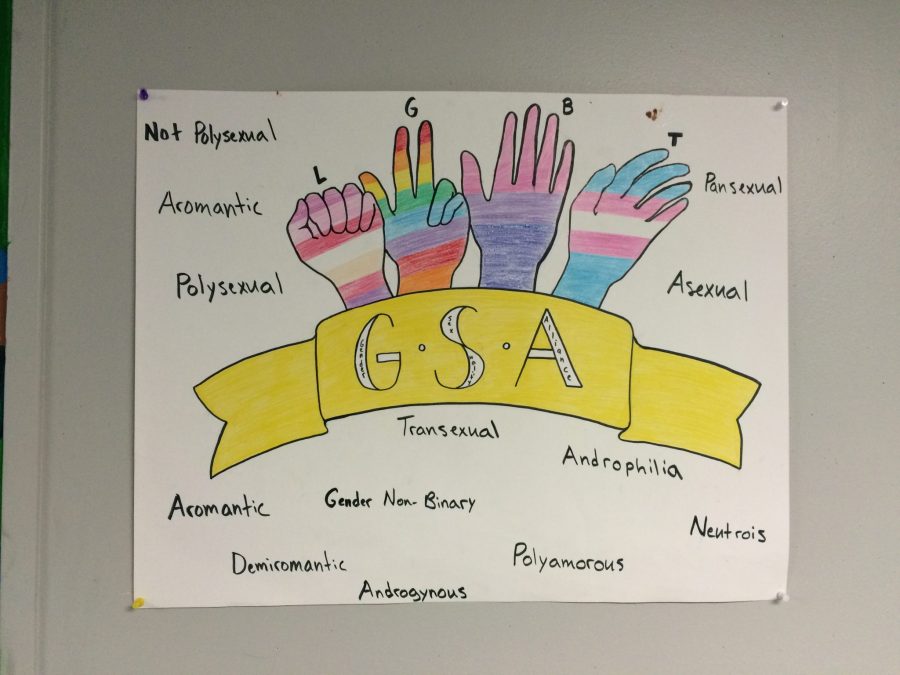 Mount Greylock offers many extra curriculars, ranging from Shakespeare Club to volleyball to the Youth Environmental Squad. But one club in particular has gained traction recently: the GSA, or the Gender-Sexuality alliance.

Gender-Sexuality alliances have become increasingly popular in the recent years. According to the GSA network, GSAs are typically found in middle and high schools and provide “a safe place for students to meet, support each other, talk about issues related to sexual orientation and gender identity and expression, and work to end homophobia and transphobia.”

The Echo met with Cailean Fippinger, president of Mount Greylock’s GSA, and advisor Danielle Nightingale to talk about the club’s projects, events, and mission.

Fippinger said the group has existed at Greylock for a while.

“I think one of the most important things that [the GSA] has really done is provided a safe and welcoming community for LGBTQ students in middle school who are maturing at Greylock,” Fippinger said.

Game days, a popular event the GSA hosts, started back in 2016, when Fippinger was in seventh grade. “Those [are] definitely a big hit and, of course, they aren’t as achievable in the era of COVID, but those were big,” Fippinger said. “We do a lot of information projects, poster campaigns, and we are always trying to make pride at Mount Greylock a bigger and better event every year.”

Nightingale added that they frequently coordinate with other clubs, such as Student Council and REV, for demonstrations and walkouts in reference to the Black Lives Matter movement and the Orlando nightclub shooting.

When asked how LGBTQ+ students are treated at Greylock, Fippinger said he feels they are mostly treated with respect.

“I think that’s due to the amount of respect and acceptance within the staff. Now, there’s always going to be disrespect and problems within the student community, but I think overall as a school, we are quite accepting, except for a few key issues.”

“Some staff do still struggle with pronouns,” Nightingale said. “They’re doing their best. I don’t think it’s malicious at all, and even our most conservative staff members do try to use proper pronouns.”

Fippinger said he would like to see improvement “in the athletics sector, within the gym classes, and with the bathrooms.”

Among the people The Echo spoke to, a common thread seemed to be that discrimination against LGBTQ+ students is more prevelant among the younger grades.

“It’s a much harder struggle for me to educate lower grades,” Nightingale said. “Seventh and eighth grade do struggle an awful lot with accepting LGBTQ+ members of their class, but as they grow older, that does tend to go away. Plus, as an out and proud teacher married to a woman, I’m in a lot of these classes when they come into ninth grade, so it’s much easier for me to take this group from middle school and help them transition into the high school, knowing that I’m gay. It makes them have a lot more respect for the GSA.”

An anonymous LGBTQ+ high school student, who is not in the GSA, told The Echo a little about their experience at Greylock.

The student recently dix research for a school project on what it’s like to be queer at Greylock, speaking with both current and past Greylock students.

“Generally,” they said, “Greylock is extremely average. It’s not terrible, but it’s not this safe haven dream…because we have a very heavy queer population, we try to hide the fact that there’s still some element of homophobia. It’s there, it’s just sort of overshadowed by the amount of openly queer kids.”

The student said they have been a victim of discrimination in gym class.

“A kid did once call me the F slur because we lost in a game of football,” the student said. “That was a really confusing response because I don’t know how that affects anything. But just the typical, like being in the locker room and getting made fun of, kind of thing.”

Although specific incidents such as this one have happened, Nightingale said the administration is quick to respond: “Mr. Schutz has always been a solid ally for us…[issues] are addressed immediately and handled well.”

Alumni Tarryn Gaherty and former president of the GSA said, “[GSA meetings] were just a really nice, safe space to have, not only with other queer people but just allies in school.”

Gaherty enjoyed the game days and especially looked forward to Pride Days. “I loved seeing everyone with rainbow on, it was just a super supportive thing,” she said.

Similar to the current students that the Echo spoke with, Gaherty recognized the growth and mental maturity from middle school to high school.

“When you get into middle school, you hear more homophobic slurs. I used to hear it just walking in the hallways or on the bus, and as I got older, especially with my grade, I heard less of that, but I would see it happening more in middle school,” Gaherty said. “Maybe it’s just like a maturity thing, but [there was] definitely more acceptance as I got older.”

In terms of specific incidents, Gaherty said nothing ever happened to her, but after GSA meetings, she would see middle schoolers picking on GSA members and would have to report the incident to Nightingale.

Gaherty said that offering more diverse courses could help to resolve some of these issues.

“I’m taking classes right now in college, and they’re a lot more diverse in what they’re teaching [at Mount Greylock],” Gaherty said. “There’s more queer history, racial history, and I feel like more things could be implemented into high school classes that teach the history of minorities.”

The anonymous student was also a strong advocate for better education. “I think we just generally need to be better educated on the topic, beyond the peer team coming in one directed study in seventh grade.”

“I have nonbinary professors right now, and there’s so many other queer people and more diverse people that you’ll meet outside of Greylock, which is important to realize,” Gaherty said.

The Echo also spoke with Jacqueline Wells, a member of Peer Team and the Student Council president, on what discrimination she sees as a student leader.

Wells said she has seen some implicit bias but feels that she can’t speak on the experience as a whole: “I don’t want to discount that there are students who’ve faced discrimination, and I don’t want to speak for their experience.”

Over the 4 years Wells has been at Greylock, she said she has seen a rise in GSA activity.

“I’ve definitely become more aware that [the GSA] is a network and support system. I think that’s positive that they have gained the reputation of being a really safe and welcoming and open space.”

When asked if she thinks LGBTQ+ students are treated well at MG, Wells said she knows everyone’s experience is different.

In their closing comments, Nightingale and Fippinger welcomed anyone to stop by their GSA meetings.

“Anyone can join the GSA,” Nightingale said. “We’re always happy to have new members, we meet on Wednesday. If you want to join the Zoom meetings, you just have to email me.”

“You should never feel scared to join the GSA if you don’t want to out yourself,” Fippinger said. “We are always willing to accept people, participating anonymously. We’re willing to provide a safe space for all students regardless of any sexuality or gender identity.”

“We just love to hang out,” Nightingale said.