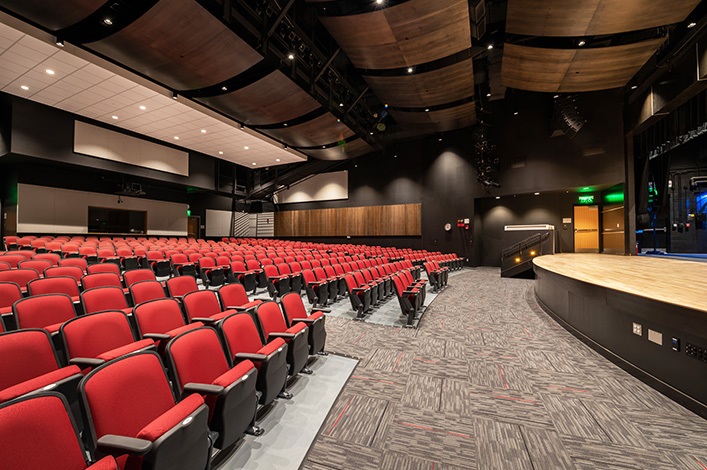 “The arts are a creative outlet for being able to express yourself in a different mean, which is really important,” said Mount Greylock band and chorus teacher Jaqueline Vinette.

Vinette began teaching at Mount Greylock this year, but has been teaching in Berkshire County for several years prior. She taught at Lanesboro Elementary School for nine years before joining Mount Greylock. Along with Vinette, Patrick O’Connell is also a new addition to Mt. Greylock’s arts  department this year, taking on the position of orchestra teacher.

Due to COVID based restrictions, there have been adjustments to classes at Greylock, but finding a safe way to teach the arts proved to be especially difficult. At the beginning of the year, Vinette would “rehearse with the kids that were there outside, and check in as a group with the Zoom kids.” Fully remote students were tasked with recording themselves playing their various instruments.

Since Greylock has moved fully remote, Vinette’s class has had “certain days that [they] rehearse together where [they] take turns unmuting while playing along with recordings.” Vinette said sometimes “I play and my students play along with me.” They also complete listening assignments and study music theory.

O’Connell said he was lucky to be teaching orchestra, as they could practice inside the school while the band and chorus were required to play outside. He said he was “really happy to have that opportunity at the beginning of the year with the hybrid model,” as he “got to know everybody and to see everybody’s faces.”

Now that all classes are completely online, however, O’Connell has had to adapt: “I’ve been trying to do as much live performance as we can together,” he said. “I know Zoom is limiting, but I feel like I’ve made decent connections with the kids.”

O’Connell has also required students to take videos of themselves playing so he can evaluate their progress.

Despite the limitations and difficulties that come with online learning, continuing to have classes such as band and orchestra is vital to students, many of whom cherish the arts just as other students at Greylock cherish sports.

As Vinette said, “I think a lot of it is the community piece, and being a part of a group to belong to.” She said it was similar to sports, in the sense that all of the students work together, “but nobody ever sits on the bench, because all parts are valued and all parts are important. Everybody has a role to play.”

Oscar Low, a senior who participates in both band and orchestra, said that the “arts programs at Mount Greylock are crucial in their abilities to connect students and engage them in creative collaboration.” He also emphasized that they “are some of the most supportive and diverse in our school.”

O’Connell also emphasized the importance of the arts for students in such a difficult time. “It’s an organic activity that’s just you and the bow and the string and trying to make the best sound you can.” He described it as “almost meditative,” and a way for students to connect with each other.

Greylock has a reputation for their emphasis on athletics. During this time, sports have given students an opportunity to safely socialize. For others, the arts have played the same role. Freshman band member Lily McDermott said,“we are making do and trying our best to have an enjoyable time.”

One of the ways that teachers are encouraging social interactions is by having students share their favorite music, as well as playing along to recordings. McDermott added that “although it can be hard with internet problems and computer glitches, we are all having fun and playing as much as possible!”

Ruth Weaver, a senior who is participating in the musical this year, talked about how everyone is adjusting to the unique format of the musical, which has been altered to meet the new COVID safety regulations and precautions .

“The musical this year is online and feels more separate than ever before, but I prefer to see it as only more independent.” Weaver said. “But, it’s still valuable and it’s still hard work and we’re still getting the chance to make something beautiful, and we are still reaching out to each other to cooperate and give notes and advice.”

Instead of an ensemble, Jeffrey Welch, who has been directing the musical for twenty-two years, is having each student “develop their own performance piece from a musical.”

He is hoping to “film everybody on the Mount Greylock stage, so that there’s a standardization,” and then post it to the school website so that it is accessible to the student body.

Sophomore Sam Tucker-Smith is also taking part in this modified musical. “It’s obviously nothing like a virtual show, but it’s really lovely that Mr. Welch and Mrs. Vinette are putting their all into making the next best thing happen,” he said. “Though of course it’s disappointing that we can’t do a real show.”

Sports have always played a prominent role in the Greylock community, and according to some, the arts are oftentimes overlooked. When the new auditorium was being built, it took longer than expected, and the performing arts had to take place on other stages and practice in the cafeteria. As director of the musical, Welch wondered, “If the soccer field or the football field were torn up, would it have taken them a decade to get the replacement space?”

Victoria Melkonyan, a senior at Mount Greylock who has done the musical in past years, opted not to do so this year. “I definitely think that the arts were shafted this year,” she said. “I understand that there’s always red tape to get past, but it’s a bit upsetting to see sports largely operating in person with social distancing and masks while the arts were either forced to be virtual or given very little thought.”

Melkonyan added that “Many of the arts programs this year felt like afterthoughts, and I do think that Greylock doesn’t treat sports and arts equally. COVID has definitely magnified that issue.”

Welch said that “the academic environment has become a lot more competitive, and because of changes in the schedule, students have had to choose between whether or not they take the arts or other academic classes.”

Even though there is perhaps not as much of an emphasis on the musical year round, up to 1,800 people come to see the musical. “I don’t think that happens with too many other events,” Welch said.

Although Greylock athletic teams compete with other schools, the same does not happen in the arts. Vinette mentioned that “historically, a lot of other schools have music programs that participate in Western Mass festivals, and there is kind of a competitive component to that which Greylock has not been part of in many years.” Vinette says she is hoping to change this in the coming years.

Vinette would also like to do some “combined concerts with other schools for a new Northern Berkshire Music Festival as well.” Overall, her goal is “continuing to promote independent musicianship among all musicians” as a way to get more people involved in the arts.

Similarly, O’Connell wants to expand the orchestra performances. “I want to connect with the Massachusetts Music Educators Association and get the orchestra ready to compete on a wider stage,” he said.

O’Connell said that he would also like to “connect the high school and middle school with elementary school students. Oftentimes that is a great way for the younger kids to be motivated to continue.”

In the past few years, Mount Greylock has attempted to incorporate the arts into the school community in more accessible ways, namely by means of Greylock Plays. Greylock Plays allows various student-artists from all grade-levels to perform before their peers in the foyer. This allowed students to showcase their talents to the wider school community.

Art teachers and students alike are hopeful this addition will give the arts a more prominent role in the Mount Greylock school community in the coming years. “I am really happy to see in the school improvement plan there is a focus on promoting the arts at Greylock,” Vinette said.