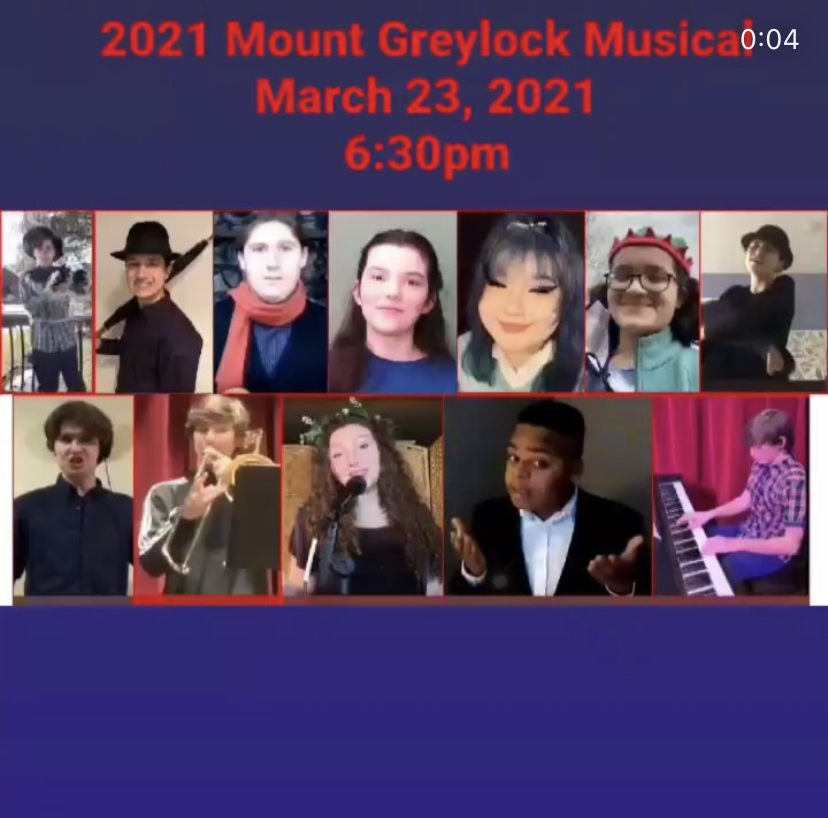 As the popular saying goes, the show must go on! Despite Covid-19 restrictions, the Mount Greylock school musical debuted on Tuesday, March 23rd at 6:30 PM on YouTube. Students performed individual, pre-recorded pieces in their own homes, which were then compiled into a 45-minute musical.

Thirteen students participated in the musical, with a mix of vocal, instrumental, and dance performances. Two seniors, Oscar Low and Ruth Weaver, were featured in their final performance for the school musical.

Low performed “Another Day of Sun” and “City of Stars” from La La Land on the trombone.

Weaver delivered a vocal performance of  “Our Lady of the Underground” from Hadestown, accompanied by Low on the trombone and sophomore Sam Tucker-Smith on the piano. Tucker-Smith later performed “Everybody Says Don’t” from Anyone Can Whistle, accompanied by a pre-recorded version of himself on piano.

“I thought the whole thing was actually really lovely,” Tucker-Smith said. “Obviously, it didn’t come close to what we could do in a normal year, but it felt like the next best thing.”

Five middle schoolers also had the opportunity to perform an act. Seventh grader Yeshe Rai sang “Quiet” from Matilda. Thomas Warren, also in seventh grade, dressed for the occasion in a scarecrow costume, performed “If I Only Had a Brain” from The Wizard of Oz.

Eighth grader Killian Scanlon performed “Tonight” from West Side Story on the trumpet, and Claire Burrow put on a performance with her singing and choreography of “Cabaret” from the musical Cabaret. Seventh grader Frances Evans sang “Home” from Beauty and the Beast.

“I was so happy that Mr. Welch and Mrs. Vinette put so much into this with making it happen,” Tucker-Smith said. “Especially seeing seventh and eighth graders coming into this, it really made me hopeful for future years.”

Junior Jonah Hane sang “Edelweiss” from The Sound of Music while accompanying himself on guitar. Sophomore Bella Jannini sang “Hopelessly Devoted to You” from Grease, and Drew Scanlon, also a sophomore, dressed in his nicest clothes for a performance of “Luck Be a Lady” from Guys and Dolls.

To close out the musical, freshman Declan Rogers accompanied fellow classmate Vincent Welch in a performance of “Singing in the Rain” from Singing in the Rain. Welch performed a tap dance to Rogers’ piano, choreographed by Welch himself.

The musical was directed by history teacher Jeffery Welch, with vocal direction from band and chorus teacher, Jacqueline Vinette. Vincent Welch was credited for technical assistance and editing.

Jeffrey Welch said that while he was pleased with the outcome, there were many components missing. Some students who originally planned to be part of the ensemble decided not to participate when they heard they had to perform a solo act. Many students also had to be accompanied by karaoke tracks.

“It was a very different experience, but that being said, the kids who did it were persistent,” Welch said. “I think they turned out a show that was different but fun to watch and rewarding to participate in.”

Welch said the weirdest part was working with a cast who had never worked together. The positive side of that, though, was that students could choose their own pieces and work individually with teachers to further their performance.

“The idea of bringing all of these together into one show when they had been done in isolation was strange,” Welch said. “Acting is very physical, the production of sound is very physical, and so direction is very limited when you are trying to do it on the screen. There were some frustrations there.”

Welch cited a few of these frustrations, including bad internet, but overall, he was positive about the final product. Welch said, “We were able to put on production in a state where it is illegal by executive order to sing indoors.”

“It was really rewarding to see it all together,” Welch said. “There were some things about the show that were similar [to normal years. It underwent this miraculous transformation in the last week. To see the pieces all put together was really fun for us.”

The 2021 Mount Greylock School Musical can be found here.