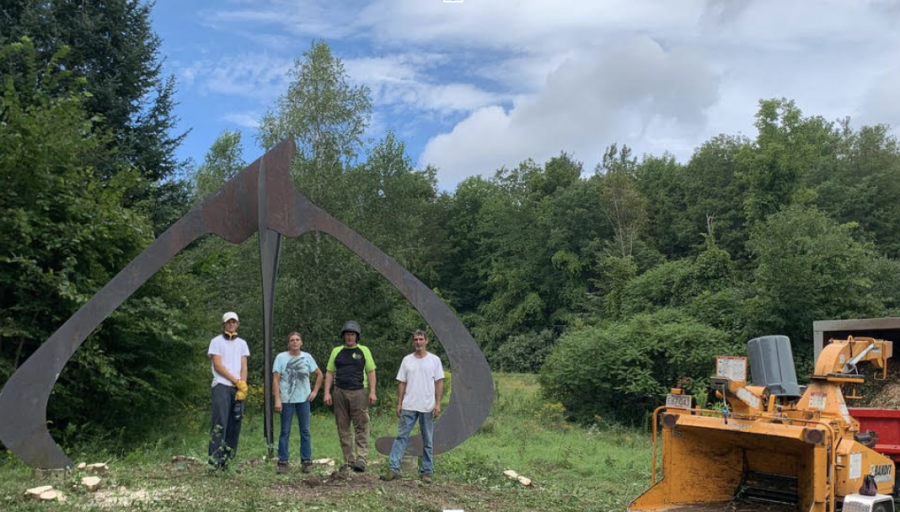 After spending the past thirty years hiding in the trees in the front of the school, the Hershey kiss shaped structure, formally known as “Solar Tangent,” has been put on display once again.

This sculpture has been on the Mount Greylock grounds for thirty years, but has been surrounded by trees and brush. Over the summer, Andrew, Hank and Henry Art (a senior at Mount Greylock) volunteered to clear the trees surrounding the monument. Now, community members and students alike are able to see the massive sculpture.

“Solar Tangent” was originally supposed to be donated to Williams College; however, the college declined the donation due to concerns regarding the size of the monument. Jacques Lennon, the original owner of the sculpture, then offered the piece to Mount Greylock Regional School.

John Maziarz, the acting art teacher during the time of the acquisition, and Richard W. Lavariere, the former building and grounds director, went to view the sculpture in January 1991. Once he laid eyes on it, Maziarz instantly accepted it, saying, “It’s great. Yeah, we want it.”

The piece was then installed in the midst of a snowstorm on Friday 18th, 1991. However, due to a lack of upkeep, the monument was soon overgrown and covered up by surrounding nature. It had stood there, hidden from the public view, for many years.

Over the summer, the school and district administration unanimously agreed to re-reveal the sculpture by clearing away the trees surrounding it. A number of community volunteers came to help, including Greylock Senior Henry Art, his father Andrew Art, and his grandfather, Williams College emeritus botanist Hank Art.

The sculpture now sits, unhindered, on the front soccer field and can be viewed from the road.