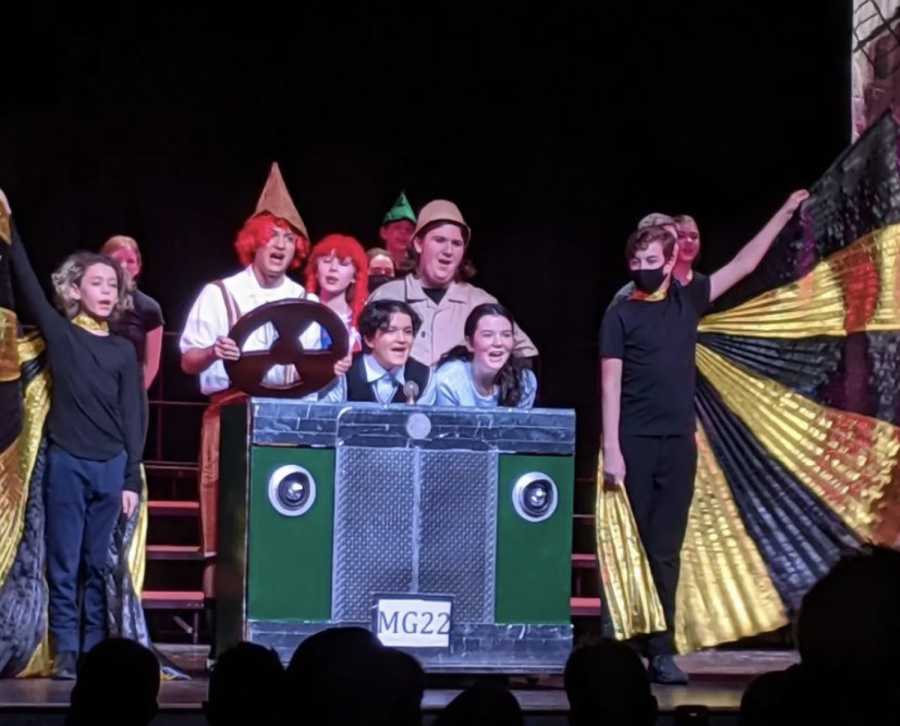 After a two year hiatus, the Mount Greylock musical returned to the auditorium with Chitty Chitty Bang Bang. The show, a short musical with a simple plot, captured a community audience with its energetic musical numbers and mature satire. The simple set and musical accompaniment seemed to only enhanced the performance. The show was directed by Jeffery Welch and the musical director Jacqueline Vinette; their excellent work together came through on opening night, March 3rd.

Assistant musical director and accompanist junior Sam Tucker-Smith began the show with an eventful overture. In all honesty, while listening to Tucker-Smith’s piano accompaniment throughout the entirety of the show, there were moments where I was sure that it was a keyboard on that setting where it plays music and 4 year olds pretend they are playing it themselves. Let’s just say that I have yet to confirm if Tucker-Smith actually has only 10 fingers.

The musical was centered around a special car, which was bought by the Potts family in the early stages of the show. Soon, the Vulgarian monarchy develops a desire for this car, but in the process, the Potts children are taken captive.

The Potts children, Jeremy and Jemima, were played by Yeshe Gutschow Rai and Frances Evans, respectively. The combination of their chemistry as co-performers and their impressive acting abilities only made it more impressive that they were both 8th graders on a traditionally high school stage. Their musical performances together were in-sync and enthusiastic, especially in one of their main songs, “Truly Scrumptious.” I believe they both have a bright future in the theater department.

Sophomore Vincent Welch played the children’s father, Caractacus Potts. Welch brought this part to life with a realistic portrayal of a middle-aged, middle-class dad. Welch’s versatility was shown with several impressive musical solos and, of course, a tap dance number.

Junior Olivia McKeon put on quite the performance as Truly Scrumptious, companion of Potts and friend of the Potts family. McKeon found the perfect moments in each song of hers to hit impressive notes and fully embrace her upper-class English character.

McKeon and Welch’s top tier performances came together for a duet in a trivial scene at the closing of the show. Potts and Scrumptious took on alternate personalities as a distraction to save the children, and their musical number was both beautiful and clearly well rehearsed. Their voices in tandem complimented each other to the maximum, with McKeon’s higher notes gracefully meshing with Welch’s lower ones.

The Potts grandfather, played by senior Jonah Hane, performed one of my favorite numbers, “Posh!,” accompanied by the Potts children. Hane’s persona and mannerisms were startlingly similar to those of my own grandfather — credit to Hane for fully embracing that role.

Much of the humor in the show snuck with two pairs of satirical duos. Both citizens of the kingdom of Vulgaria, which seemed to possibly have ties to Communist regimes, the duos lightened the show and created a much needed space to laugh. The Baron and Baroness of Vulgaria, played by Che Guerra and Claire Burrow, respectively, were chaotic villains, providing a mature number in “Chu-Chi Face.” Burrow’s dramatic moments rounded out her character as a literal drama queen.

The other duo consisted of eighth graders Lincoln Simpson and Alex Briggs, acting as a young pair of spies for the Vulgarian monarchy. As the classic duo, they provided comic relief throughout the show.

The dance performances throughout the show added to the enjoyable watching experience. Led by dance captain and choreographer Elena Caplinger, the dance numbers were versatile and creative. Caplinger’s beautiful dance solo in “Hushabye Mountain” with Welch’s singing in the background was really the cherry on top for the entire show. It’s clear that all the dance numbers were carefully choreographed and performed.

Chitty Chitty Bang Bang, the one hour performance, was the show we all needed after two years of minimal in-person performances. The show highlighted the incredible talent of the theater department at Mount Greylock, and shows a bright future for those who will be returning next year.