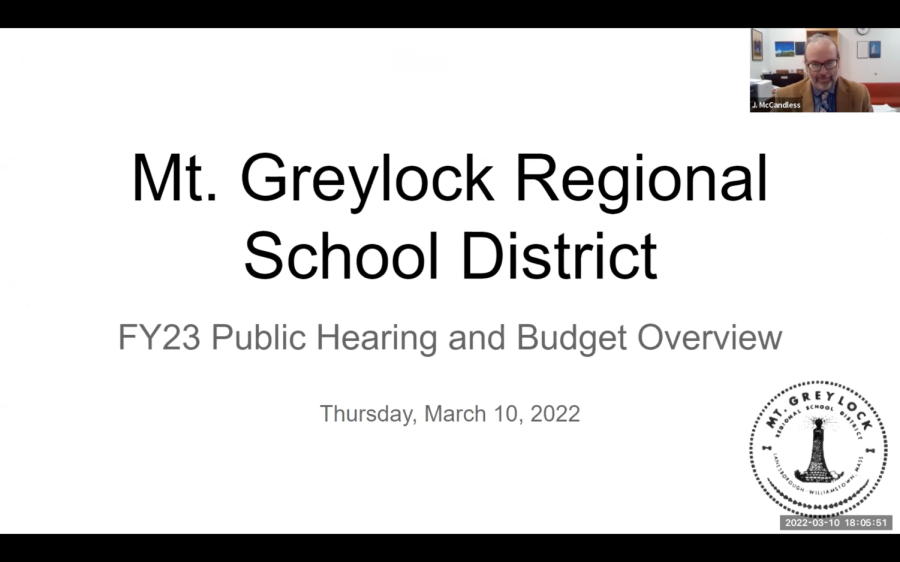 On March 10, the Mount Greylock School Committee voted to approve the 2022-23 budget, proposed by Superintendent Jake McCandless. Included in this budget is a proposal to hire a Director of Diversity, Equity, Inclusion, and Belonging (DEIB) for the district. McCandless estimated that position would be around $80-100,000 dollars in salary.

In his proposal, McCandless expressed full support for this position. “Although I recognize that we certainly disagree on what we should be doing to address bias in our school district, in our schools, in our classrooms, in our communities,” McCandless said, “I know that we all agree that we must be doing something.”

McCandless presented several charts showing statistics regarding the makeup of the student body. According to the statistical charts, the percentage of minorities in the district has experienced a steady increase over the past five years.

“We need to increase the sense of safety and belonging for our students and their families in our schools and in our communities,” McCandless said.

During the public comment section of the School Committee meeting, many community members spoke of their support or disapproval of the position within the budget.

“Even if systemic racism is prevalent at this school, it does not follow that the DEI hire is a solution,” community member Luana Maroja said. “We feel that the taxpayer money is best used to provide new learning experiences and to help struggling children thrive at Mount Greylock.”

Following Maroja was Ralph Hammann, who built off of Maroja’s argument to emphasize his opinion that it should be the teacher’s responsibility to foster belonging and inclusion. Both Maroja and Hammann felt that this DEIB Director may only force a larger divide between students based on their identities.

“I believe that students should feel discomfort and horror in examining the egregious events of our society, but we shouldn’t manufacture discomfort among and between the students in the name of equity,” Hammann said.

Bilal Ansari, a community member, spoke about his struggle in schools when he was younger. Ansari told the Committee that he was a member of a majority white school in his elementary years, and he faced discrimination with no teachers or staff members to which he felt comfortable speaking.

“In high school, I was almost expelled from school because I had so much anger and rage and I was getting in so much trouble,” Ansari said, “but there was a DEI person working in my high school who saved my life, who fought for me to be there.”

Ansari, who supported the hiring of a DEIB Director, also wanted to thank people for opposing this initiative. “You give me a right to follow my beautiful parents in fighting for civil rights and justice.”

Parent Kim Nicoll, who has two students in the district, also expressed her support for the position.

“This position will help ensure all of our children encounter a welcoming, inclusive community that values them for who they are and, in turn, will allow them to access the high quality, thoughtful public education that they deserve,” Nicoll said.

Henry Art, a senior at Mount Greylock, spoke about his experience teaching different DEIB initiatives as a member of the Mount Greylock Peer Team and president of the Class of 2022.

“I can confidently say sufficient support from someone, who would be in that position as a DEIB director, is not currently present, and I feel like that sort of leadership is paramount in actively increasing the efficacy and the impact of those discussions and, in the future, making the school and the school district a more inclusive place,” Art said.

After the closing of the public comment section, the Committee discussed among themselves, along with McCandless, about the budget, and within that, the benefits and downsides of hiring a Director of DEIB. The Committee voted unanimously to approve the budget, with just Steven Miller abstaining. Carrie Greene, Julia Bowen, José Constantine, Curtis Elfenbein, and Ursula Maloy all voted to approve the budget.