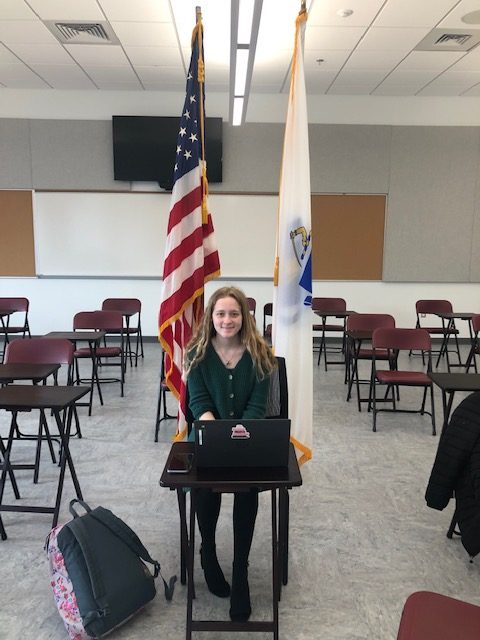 On April 1st, Mount Greylock junior Jennah Simpson attended Student Government Day (SGD), an event where students from all over Massachusetts come together and participate in mock government for the school day with established politicians.

Simpson represented Berkshire County at SGD and was made aware of this event by Register, Educate, Vote advisor Mary MacDonald because of Simpson’s interest in politics and government.

Student Government Day happens every year in April and gives students a chance to see the intricate background of their state government that teenagers are normally excluded from. This year, due to COVID restrictions, the event was virtual.

In the morning half of SGD, Simpson debated two bills with other students. Then, the chairs of the government’s Joint Committee on Education went into breakout rooms. Simpson was put into the breakout room with the House chair, Representative Alice Peisch.

One of the bills that was debated was about creating healthy lunches in schools across Massachusetts. The other bill focused on lowering the municipal voting age from eighteen to sixteen. At the end of the debate, the students voted on each bill. Both bills garnered support from students, but, according to Simpson, the school lunch bill received slightly more support than changing the municipal voting age.

“I had a great time at SGD, and as a student interested in politics, it was fun participating in SGD,” Simpson said.

Despite the event being virtual, there were still many renowned Massachusetts politicians present via Zoom. Some of the most notable presences were Governor Charlie Baker, Commissioner of Education Jeffrey Riley, Attorney General Maura Healey, Speaker of the Massachusetts House Ron Mariano, and Associate Justice of the Massachusetts Supreme Court Serge Georges Jr.

Simpson recommends SGD to anyone, even if they do not know anything about politics. “There was a huge range of students at SGD, from students who knew a lot about [SGD] to students who had to research the event, so everyone fits in.”

Simpson hopes that next year, Student Government Day will be in-person. Anyone in the class of 2023 and 2024 will be eligible to participate in SGD next year.