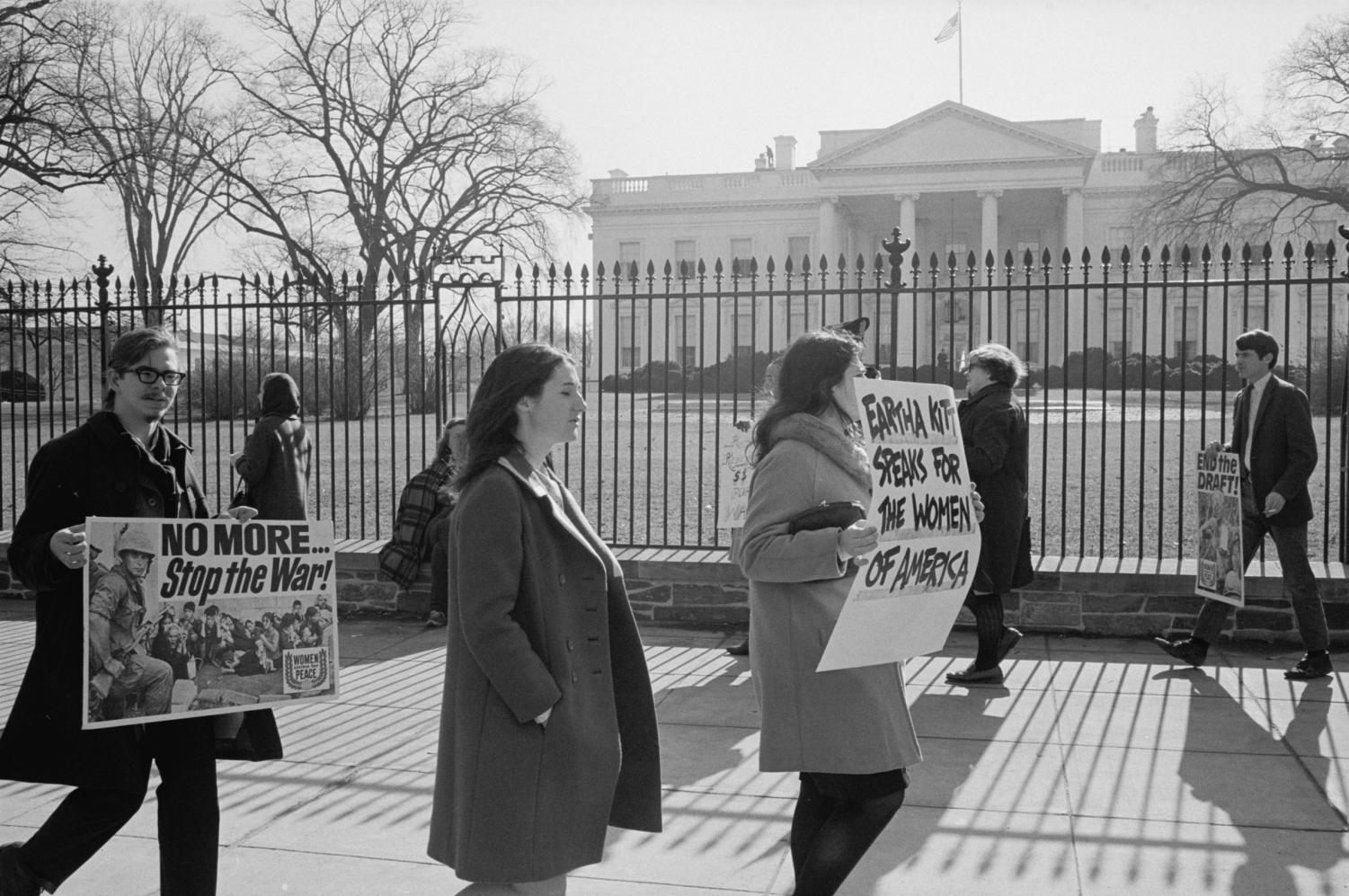 2018 marked the half-century anniversary of a year that rocked the nation. The Echo staff took a closer look.

As 2018 draws to a close, one can reflect on a year full of personal and global events that have left a mark on everyone. But looking back even further, it is useful to notice that this year has even deeper historical connotations as the centennial of the armistice ending the first World War and the ten year anniversary of the housing market collapse. However, with milestones even surpassing those of 2018 is a year fifty years before this: 1968.

In one tumultuous year, multiple conflicts raged across the globe with the Soviet invasion of Slovakia, wars for independence in Africa, and, of course, the Vietnam War. The Civil Rights Movement came to a momentary close, and America mourned the assassinations of prominent political figures Robert Kennedy and Martin Luther King Jr. But the year ended on a happy note with the first orbit of the moon in December by the crew of Apollo 8.

Closer to home, it is evident that the school has undergone much change since that period. Longtime Williamstown resident and science teacher Shawn Burdick as well as history teacher Andrew Gibson along with several students commented on the relationships between and the sentiments of 1968 and 2018, as well as what they thought had changed over these fateful 50 years.

To get a better idea of the culture and general public sentiment during 1968, the Echo talked to two teachers who were around during the time. High school history teacher Mr. Gibson is able to put his perspective in a more global historical context due to his studying of American history. Gibson’s view of societal changes over the past half-century includes a decline in patriotism and traditional values. His concern with what he perceives as a modern anti-traditionalist spirit is that it “cuts ourselves off from the past… that also means cutting ourselves off from all the good stuff that got us here.” Gibson believes that Americans now take their freedoms for granted and are overlooking their prosperity, political liberty, and benefits of being under free democratic rule that he considers a “historical anomaly” only existing in a select few countries over the past couple centuries. He accepts that we haven’t appreciated our constitution for a long time, “but we used to at least do traditional things, you know we’d have flag day… people would join the military… they were okay with traditional religion.” Now, he argues, our people have lost their roots, and with that their connection to the nation, making the claim that our situation has degraded as it has strayed from tradition over the past 50 years.

Besides the debate over whether moving away from the 1960s has been beneficial to the nation, Gibson also pointed out a change he cited as even more influential to American society, the evolution of the news media and the drastic changes in transmission of information that has transpired. In the 1960s, television was the big deal competing with print as a way to deliver information and news. Now, with the internet and websites here in 2018, Americans are bombarded with information at an even quicker rate. Gibson believes that Americans today have no time to really reflect on the news they receive; they only respond to it.

Science teacher Shawn Burdick, 9 years old in 1968, shares some of Gibson’s perspective, but simultaneously recognizes the positive strides America has made in these last 50 years. In 1968, as Burdick explains, “I was aware that there were Vietnam War protests and unrest… I was still pretty young, but I was aware of stuff like that. I was aware of, you know, assassinations of, like, Martin Luther King Jr. and Bobby Kennedy, I was aware of stuff like that. But it didn’t affect me that much.” Ever the scientist, Burdick added that “the sort of things that really affected me were the space program… you know, we were orbiting the moon, we were about to be landing people on the moon… that was the stuff I was really interested in. It was really cool.”

On the more cultural side, Burdick was no stranger to the societal shifts of the 1960s, adding that trends such as rock music and hippie-style dress were the norm even in more rural areas such as the farm in the Berkshires where he grew up. In terms of cultural norms and social progress from 1968 to 2018, Burdick noted that “there has been a lot of cultural progress on, you know, not just white males. Women have a very different role than they had 50 years ago, people of color… it’s still not great, but it’s a lot better than it was 50 years ago… when I was old enough to care more, like when I was fourteen, fifteen, sixteen, in high school, I was seeing how much things had changed for [marginalized groups]. And my prediction was ‘wow, in another few years, it’s gonna be completely solved.’ Well, that didn’t work out. But it seemed like… things were moving so rapidly for a while, and it seemed like things like that were just gonna get fixed. And unfortunately, that is not the way it worked out. But that’s not to say we haven’t come a very long way in 50 years.”

On the more detrimental side of things, he mentioned that raising children is done very differently now as opposed to fifty years ago, with lack of adequate parenting leading to a generation that is less ready to be independent and responsible. “You’re employee of the month if you just show up [for work]! How can you not show up for work? … the sense of responsibility just is not there. If you show up and do what they say, you’re employee of the month. [Laughs]. And that’s a failure of the parents, in many ways.” In addition, Burdick noted that society is often less polite than it used to be, and that students, especially when in school, are lacking in discipline. “The way I look at it is, back then, a very small percentage of kids misbehaved in school. Now, a very large percentage of kids misbehave in school.”

Burdick also mentioned the prevalence of technology, but instead pointed out the good it has done for the youth of 2018: “because of technology, you have more opportunities to be exposed to more, different things… I mean, when I was young, we got one TV channel. One. Now, you have (potentially) hundreds of TV channels… Not just for entertainment, but education as well.” In 1968, according to Burdick, “there wasn’t an internet… it was so much harder to find information. And now it’s so easy to find information. The trouble now is that you’re almost overwhelmed by the amount of information, so you have to learn how to filter it, but just the fact that any question you have, you can get [an answer] instantly or almost instantly, that’s a huge, huge advance.”

the fact that any question you have, you can get [an answer] instantly or almost instantly, that’s a huge, huge advance”

Certain Greylock students, though not there to witness certain societal changes throughout the years, also had stances on what they perceived through studying history and living in 2018. Freshman Tashi Rai believes that we need not look to the past for traditional solutions to our problems. Although she does agree on the point that the constitution must not be taken for granted, she believes it must be greatly amended and the American people should not be satisfied with what she sees as an outdated system. In contrast to Gibson’s views, Rai believes that the system of tradition is faulty because not all Americans are prosperous and have equivalent political and personal liberties, specifically mentioning the “suppression of African American voting rights in the 2018 midterm elections.” In addition, she does not support only returning to traditional military holidays like the ones Mr. Gibson remembers from 1968, instead focusing more on new holidays that celebrate other groups that face challenges such as people of color and the LGBTQIA+ community. In fact, Rai warned against patriotism because it can be used as a mechanism for producing “anti-immigrant sentiment” and decreasing vital global cooperation. Overall, Rai places new change at a greater level of importance than returning to the values of 1968.

Sophomore Priya D’Souza had a similar outlook, noting that social equality for all groups is an important and ever-present notion that had not existed in such force as it does now in 1968, but also adding that the role of the media has evolved significantly over the years: “it’s… wack to live in 2018, because America has recently become one of the most dangerous countries for journalists, up there with Afghanistan and Syria… but also, in the 1960s with the Vietnam War, that’s kind of where that sensationalizing started. Like, in 2018, Trump has sensationalized the presidency, and that’s kind of been the focus these last few years… in 1968, it was the first time journalists could, you know, be there, and that led to them sensationalizing the Vietnam War.”

America is undeniably different than it was fifty years ago, and for better or for worse, all students are all a part of its changing landscape. Looking back to 1968 can serve as a useful reference for those who would like to put such an important year as 2018 in a larger context. As D’Souza put it, “knowing 20th-century politics is crucial to understanding the world we live in today.”

To share your thoughts, send letters to the editor to mountgreylockecho@gmail.com or leave a comment on one of our social media accounts or below.