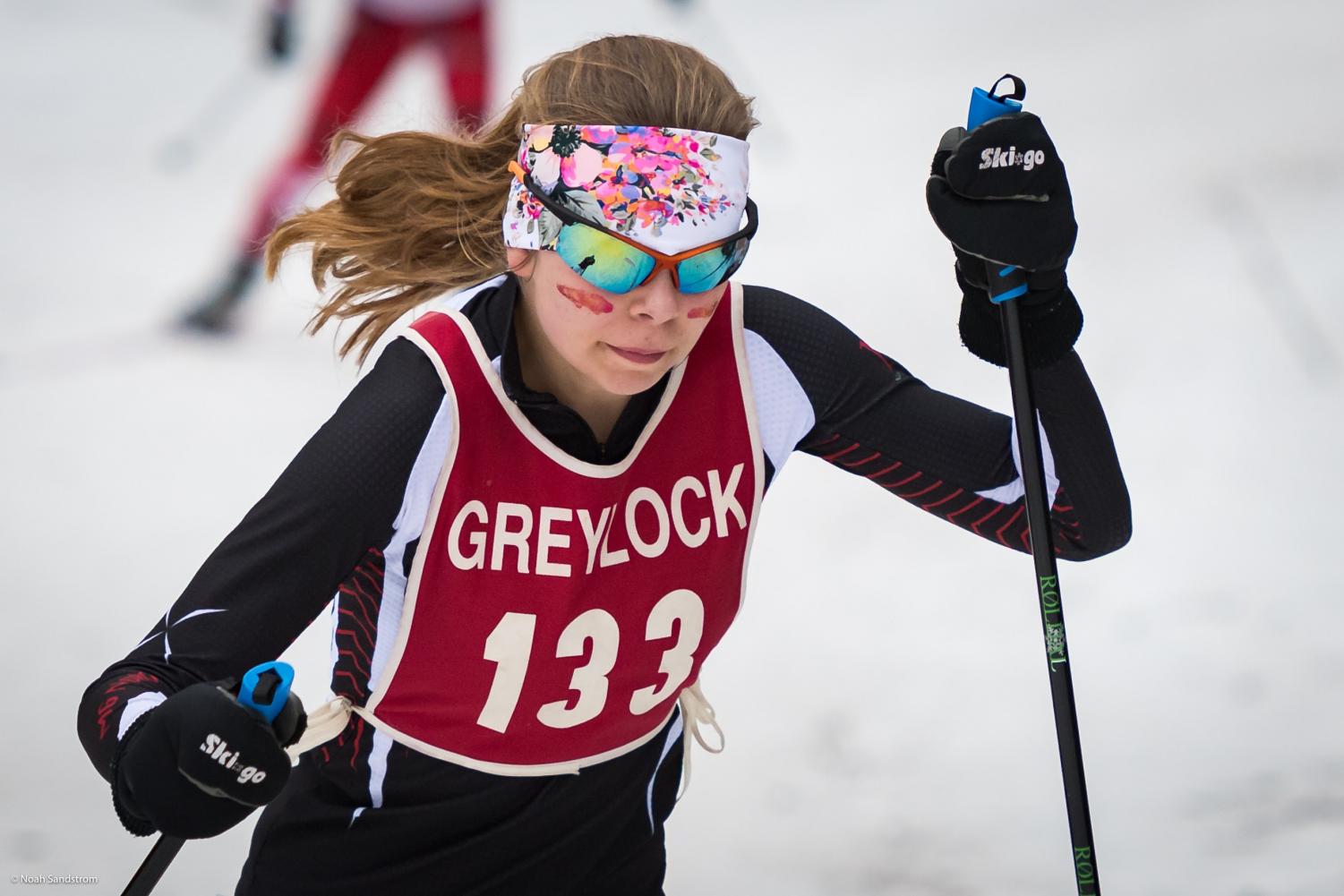 Miriam Bakija skis in a 2018-19 league race. Bakija is one of the team’s three captains this year. (Photo courtesy of Noah Sandstrom)

Miriam Bakija skis in a 2018-19 league race. Bakija is one of the team’s three captains this year.

The Mount Greylock girl’s Nordic ski team started off the season with their first practice on last Tuesday. The team is looking forward to the 2019-2020 season, which will as usual feature seven league races and a state championship race.

The team will have the usual three coaches this year — Hilary Greene, Mark Santella, and Hiram Greene, with the addition of Tyler Hallenbeck.

“We’re really excited to have Tyler in our group of coaches,” senior captain Brandi Gill said. “He has been skiing for 17 years and has a lot of experience.”

The captains for the season are seniors Amelia Murphy, Miriam Bakija, and Brandi Gill, who was the league MVP last year. The team has lost two seniors from last year — Ella Dudley and Margo Smith. “Margo is going to be a really big loss this year because she was a top finisher at states every year,” Gill said.

Although last year’s seniors will be missed, other skiers are stepping up and there is a large handful or returning skiers who have performed well in the past.

Similar to in cross-country running, Lenox is one of the girls’ Nordic ski team’s biggest competition. “I think lenox is probably going to be a powerhouse this year,” Gill said, “They’ve had a solid team in the past couple years, and are only getting better.” The team competes against Concord-Carlisle at States, and last year the Mounties tied with them for first place. Lenox came in runner up, only three points behind both teams.

Preparing for races requires hard work, determination, and the tradition of waxing the skis before every race, according to Greene. “Cross-country skiing is one of the most challenging sports because it requires a high level of skill, endurance, strength, and speed,” she said. “We spend quite a bit of time working on technique so our skiers are efficient and can handle any snow conditions or terrain. We also do a ton of core and strength training.”

The Mounties hope to keep their State title this year. Greene said the months ahead are meant “to teach about 25 new teammates to ski and hopefully fall in love with the sport, have a team culture that promotes teamwork, commitment, excellence, and fun, have every teammate demonstrate improvement, and win our 5th straight State Championship.”

“Win the league and win States,” Gill said in regard to her goals for the team. “I think this year will be a building year, but I think the goals are achievable.” The first race is at Prospect Mountain in Vermont on December 31st.