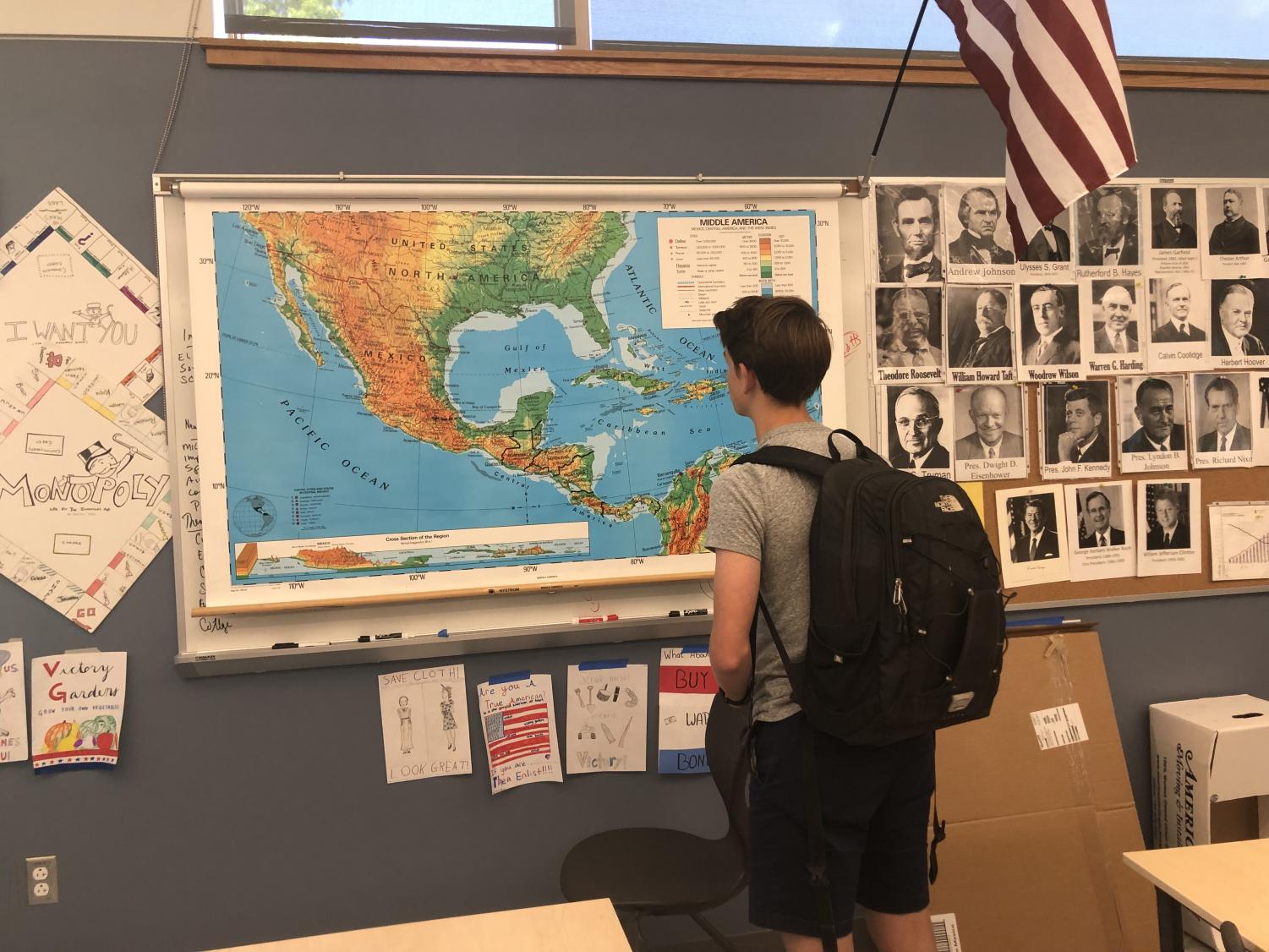 A junior examines a map in a Greylock history classroom. (Photo courtesy of Clara McWeeny)

A junior examines a map in a Greylock history classroom.

Across the district and across the world, schools introduce a plethora of language options, and many do so from a young age. Where does Greylock fall?

In only third grade, Lukas Nordstrom, a German student who spent a few months at Greylock, began his language education, spending 45 minutes a day, two or three times a week, learning English.  Beginning in fifth grade, he and his peers were required to take French or Latin and by eighth grade were able to take Spanish. “I think if you speak multiple languages you have a wider perspective of the world around you,” he said.

A median of 92% of students are enrolled in a foreign language in Europe, compared to 20% in the United States, according to the Pew Research Center. Furthermore, most European countries have national mandates on language, with most European students beginning their language education between the ages of six and nine.

“The science of education says that there is great benefit to teaching foreign language in elementary school,” Greylock social studies teacher Jeffrey Welch said. “You are acquiring language at a voracious rate in your primary years, and you have the capacity to learn more than one at a time.”

The Echo conducted a survey of 121 students at Greylock. Of those surveyed, 30.6% strongly agree and 44.6% agree that languages should be taught in elementary school. 16.5% expressed no opinion, 5.8% disagreed, and 2.5% strongly disagreed.

I think if you speak multiple languages you have a wider perspective of the world around you.”

According to Amy Kirby, Spanish teacher and head of the language department at Greylock, creating a language program with both the high school and elementary schools could now be a serious possibility.

“I think realistically it could happen because we are regionalized now,” she said.

“If there were a movement among the public to get it done then I think it could happen,” Spanish teacher Paul Johnson said, “but I understand the limiting factors.”

Currently, Greylock offers Latin and Spanish, and no language programs exist at the elementary level. “I feel like Greylock does a great job emphasizing the importance of languages. However, by just offering two languages, it often feels like they are limiting our exposure,” said one Greylock student.

Lenox has about two-thirds the number of students per grade as Greylock, yet offers an additional foreign language, prompting questions regarding Greylock’s language program. Students expressed frustration at this limitation.

“It is difficult to follow your passion when you only have two options,” one student said.

Johnson, who used to work at Lenox, said that “that demonstrates that they have a commitment to offering more than one spoken language but also that they have been able over the years to keep up the numbers.”  Adding another foreign language would not only require at least one additional teacher, but also a sufficient number of interested students.

Of 121 surveyed students from all grades, 88.4% of which take a language, 62.8% responded they would take an alternate language if given the opportunity and 24.8% responded maybe. Of the languages listed- French, Italian, Spanish, Latin, Chinese, or Other, 44 students selected French, 20 selected Italian, 18 selected German, 10 selected Spanish, 7 selected Chinese, 4 selected Latin, 4 selected Other, and the 14 remaining students wrote in responses.  Of the written responses, 3 students said American Sign Language, 2 said Greek, 2 said Russian, and 2 were torn between French, Italian, and Latin. The other responses said they would take Japanese, Korean, Farsi, Arabic, and no language.

Starting in 1999, Welch taught Italian as an elective for five years.  Despite the course’s popularity, a lack of staff in the History department led to the class’s fall.  Regarding Italian, Mr. Welch said, “I love it and think that it is a beautiful language, rich in history and integral to the history of the western World.”

“I think there could be room for another language,” Kirby said, “but if it will happen remains to be seen.”  Due to the amount of resources necessary to support an additional foreign language, Johnson said, “adding another language would not be a bad choice but a brave one.”

“Language has connections to every single thing we do,” Kirby noted.

Research suggests children who are exposed to multiple languages have increased cognitive function. And, according to Williams Professor Soledad Fox, “professionally, language is very important and I certainly see students graduating getting really interesting jobs.” In a diverse world, language skills are crucial for countries trying to compete in a global economy.

I absolutely think that language is integral to cultural understanding.”

“I absolutely think that language is integral to cultural understanding,” said Mr. Welch.  For example, a language’s vocabulary can help outsiders understand the values of the culture.

“It is respectful and culturally sensitive to pronounce words and names as they should be pronounced,” said Mr. Welch.

Mrs. Kirby said, “language allows us to think globally and be globally minded when considering other people’s perspectives.”  Through other perspectives, global issues can be addressed.

“It’s such a pleasure to learn a language and be able to participate in other cultures,” Fox said. “If you don’t speak the language and you’re in another country, it’s as if you’re at a dance and don’t dance. People can really fall in love with a language.”