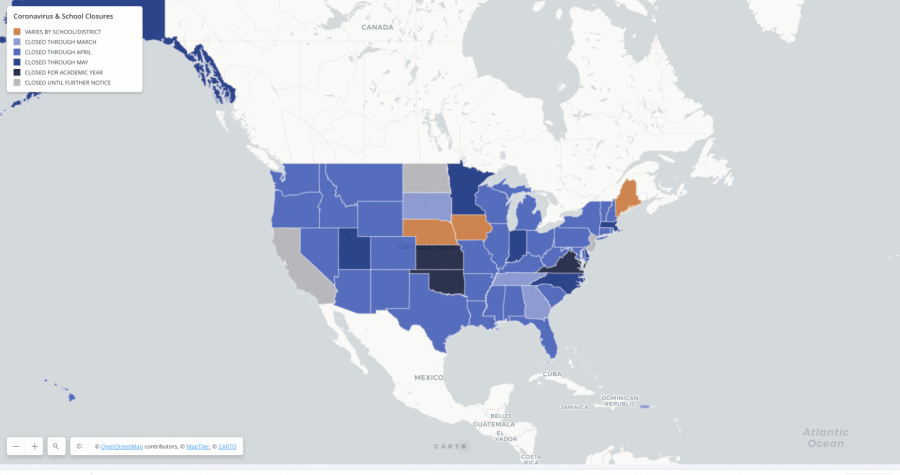 A map of school closures across the country

With the rapid expansion of coronavirus across the country, all schools are cancelled state-wide, except in Nebraska, Iowa, and Maine, where cancellations vary by district. Virginia, Oklahoma and Kansas have already announced the closure of schools for the rest of the academic year.  As reported by UNESCO, over 130 countries have implemented nationwide closures, affecting 80% of the worlds’ students.

For many students, the closure of schools, sports, clubs, and uncertainty regarding graduation, prom, and other social events has dramatically shifted daily life, leaving many dispirited to say the least.  Lukas Nordstrom, a German student who visited Greylock last semester, said, “at first people were fine with it, though of course not happy with everything cancelled, but now people are starting to get a little aggravated because there is nothing to do.”  At Lukas’s school, teachers are posting assignments online, though there is no method to submit the finished work. He said, “the coronavirus forces German schools to digatalize and set up new technology which many schools are completely new to.”

Jett Manchester, a highschool student in San Francisco explained people in California are under a shelter in place. “People have to social distance themselves and in San Francisco someone can get fined up to $400 for not social distancing,” he said.  All work and school is closed, forcing families to work from home. The magnitude of San Francisco’s situation is “due to the fact that San Francisco is a popular port for cruise ships; that’s where it all started,” said Manchester.

All over the world communities have implemented similar measures, such as social distancing, forcing the closure of schools, businesses, large gatherings, and travel. “We are all witnessing a crazy time in history that hopefully can bring us together,” said a Greylock sophomore.